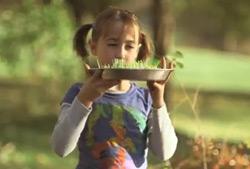 Quarter-century-old farmers’ cooperative Organic Valley is using a television ad for the first time as part of a new campaign tag-lined “Bringing The Good.”

The campaign, the cooperative’s largest to date, centers on the premise that what a dairy cow eats is a critical factor in determining the ultimate quality of the products it produces.

The creative, from Minneapolis-based branding and advertising agency Solve, conveys the quality of Organic Valley’s organic milk and other dairy products by demonstrating the cooperative’s dedication to keeping its dairy cows in pastures where they eat rich, natural grasses.

The TV spot, dubbed “Mud Pie,” shows the young daughter of an Organic Valley farm family participating in the cooperative’s tradition by carefully growing grass from seeds, in a pie tin, to feed to her family’s cows.

The spot (viewable on YouTube) will air in 60-second and 30-second versions on the major broadcast networks in about a half-dozen markets that Organic Valley has targeted for market-share growth, according to Corey Johnson, president of Solve.

With more than $800 million in sales in 2012, Organic Valley -- which has in the past focused its advertising/marketing primarily on print, with some digital elements -- is “poised for its next phase of growth,” according to the cooperative and Solve.