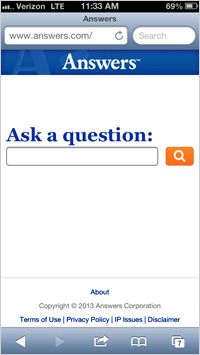 Like other Web publishers, Answers.com has seen a dramatic shift of its user base to mobile devices over the last year or so. Adapting to the mobile migration, the company has launched a redesigned mobile site that allows users to swipe the screen to get answers to questions.

During testing over the last few months, that “app-like” feature has helped boost interaction on the mobile side. People are now viewing more than five times as many pages per visit and spending twice as much time engaging with content on the mobile site. Mobile overall now represents half of all Answers page views and a third of its unique users.

Answers.com doesn’t yet have an app yet to go along with its HTML5-based mobile site. “We felt like we needed to crack the code on the mobile Web first,” said Peter Horan, president and COO of Answers Corp. pointing out that the site gets most of its traffic through referrals from Google rather than people coming directly to the site. (A dedicated app is expected later this year.)

Still, the company wanted to add the swipe functionality in its mobile site to suit the way people are consuming content on devices. “That’s just a behavior that the market understands,” said Horan. By swiping, users necessarily have to view an extra page on the mobile screen to see an answer. Swiping after the first answer page reveals more related questions and answers, driving more page views in turn.

Unlike a desktop page, which has perhaps half a dozen AdSense text ads along with display ads on both sidebars, Answers typically shows one text ad at the bottom of each page. Horan said the company will also periodically run 300 x 250 interstitial banners on smartphones or a full-page interstitial on the iPad version of the site.

When clicked on, content for some of the text ads includes the same swiping capability as the editorial content. Horan did not specify click-through rates for mobile ads but said they are comparable to those on the desktop. And while the desktop site still drives a higher volume of impressions and higher CPMs than in mobile, Answers.com is pleased with the mobile monetization so far.

“We’re among the publishers that are really happy with the shift to mobile. We’re seeing more content consumption, and it's driving great business results,” he said.

With nearly 49 million unique visitors in January, Answers.com ranks as the 20th largest Web property, according to comScore. But Horan noted that growth is focused on the mobile side, where a third of its visitors are mobile-only. The site is seeing increased activity around big events and breaking news. The election of a new Pope last week, for instance, generated 250,000 visits in one day with questions related to the elevation of Cardinal Jorge Mario Bergoglio.