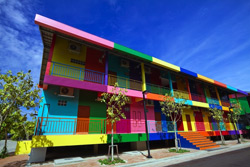 Millennials have to fix things, too. They might spend time on digital screens, but they can’t avoid the ones on doors, especially if they own them. Fixing faucets, painting walls, nailing up a shelf or two and doing crafts aren't age-specific, as Martha Stewart probably knows better than anyone.

Thus, paint company Behr is going after a younger crowd via a program with social content site BuzzFeed. The company is sponsoring a new DIY BuzzFeed social and dedicated-content vertical wherein people can offer solutions and share ideas about how to tame various household bugbears, and bullhorn cool design ideas. Posts on the site include things like The 24 Most Colorful Cities in the World, and 35 Money Saving Home Decor Knock-offs.

The color theme, obviously, is not just serendipity as far as Behr is concerned. Since BuzzFeed doesn't do advertising, brands have to do value-add programs to get some traction.

Jon Steinberg, president and COO of New York-based BuzzFeed, says Behr is touting vibrant colors for this program, and two-in-one paint/primer formulations that obviate the two-part process of painting something. "It's geared toward time-constrained Millennials," he says, adding that the company is also doing a B-to-B push to startups, small companies that will include a "surprise" in September.

"It has various phases and content over next couple of quarters," he says, adding that BuzzFeed is moving to ink those kinds of longer-term partnerships, although the site already has long-term content plays with companies like GE, Microsoft, Pepsi and GEICO, which has been running a program for eight months, he says. "Our renewal rate is about 80%," he adds.

Steinberg says the genesis of the DIY channel, of which Behr is the first and currently only sponsor, was simply the volume of queries and content flowing in from social channels like Pinterest. "We were getting so much, it drove us to create a section. It also lets site visitors mouse over an image to launch a social-sharing tool.

"People often think Millennials are younger than they are. But by the time you're 28, you are painting and furnishing an apartment; lots of [Millennials] also have children." He says the only other BuzzFeed household/hardware/repair program has been with Home Depot.