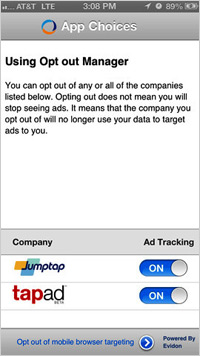 As of Thursday, users who download the app, dubbed Ad Control, can opt out of behavioral targeting by two networks: Jumptap and Tapad. A total of 16 ad networks have said they will offer opt-outs through the Evidon app, according to CEO Scott Meyer. Three agencies -- GroupM, VivaKi, and IPG Mediabrands -- also will require their mobile-network partners to integrate with the app.

Evidon expects to release a similar Android app by the end of the month, Meyer says. Evidon also will power the AdChoices icon for mobile networks and agencies. That icon is aimed at informing users about online tracking and allowing them to opt out of receiving behaviorally targeted ads. When iPhone and iPad users click on the icon, they will be taken to an iTunes page where they can install the Ad Control app. People who do so will be able to opt out on a network-by-network basis.

“It's very simple for consumers to use,” Meyer says, adding that it “doesn't require any complicated implementation by ad networks.”

The app also will offer ad networks and agencies a mechanism for compliance with the self-regulatory group Digital Advertising Alliance's upcoming mobile privacy rules. Those standards are expected to require companies to notify users about “cross-app targeting” -- that is, targeting ads based on information collected across apps -- and allow consumers to opt out. The mobile rules also are likely to require companies to obtain users' opt-in consent before collecting some information, like address-book data.

Even without the Evidon app, Apple users have other ways to avoid tracking.

Meyer says that ad networks that integrate with the Ad Control app won't use information from any identifier -- old UDIDs, current “advertising identifiers,” or other methods of device identification -- to track people in order to serve them ads.

Evidon isn't the only company that is offering ways for people to opt out of mobile targeting. TRUSTe -- which also is powering some icons -- has a privacy tool that allows people to avoid receiving ads targeted based on their mobile activity.

The mobile network Tapad is working with both TRUSTe and Evidon. Tapad CEO Are Traasdahl says that TRUSTe will power some icons, while Evidon powers others. “They're two different ways of solving the same problem,” Traasdahl says. “We want to work with both companies to see adoption on the consumer side.”