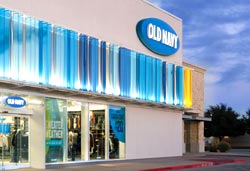 It’s been years in the making, but Gap Inc. is laying out plans to build on its recent gains, and says it will start spreading its comeback strategies, both to new markets and digital channels.

In a presentation to investors, Glenn Murphy, chairman and CEO of the San Francisco-based retailer, discussed key elements of what made 2012 a success, and its strategy to expand its market share of the $1.7 trillion world apparel market. That includes efforts to franchise Old Navy stores in international markets, adding Old Navy and Banana Republic to its Gap presence in China, and developing a more comprehensive omni-channel strategy for all six of its brands, including Athleta, Piperlime and Intermix, which it bought back in January.

Murphy predicts Gap can increase its domestic share of the $300 billion clothing market to 4.5%. Expansion plans for the flagship include 75 new franchises this year (it currently has over 300) in such new markets as Brazil and existing markets, including China, as well as explorations of opportunities in India.

And in the next five years, he says, the company intends to offer an “industry leading” seamless shopping experience for customers, who are increasingly demanding new ways to combine shopping in stores with online browsing and buying. That means an “end-to-end system, which includes capabilities such as ship-from-store, find-in-store and reserve-in-store, and is designed to leverage Gap Inc. channels and resources to drive store traffic and conversion,” the company says in its release.

While ship-to-store and find-in-store are practically table stakes for retailers these days, Gap says that the “reserve in store” feature represents a big opportunity, allowing customers to come in and try multiple outfits and create a richer experience, and it will begin testing the feature this spring.

It says it is also working to create greater personalization of its web pages.

In its most recent sales announcement, the company says March sales, overall, grew 7% from the prior year, despite slight declines in comps due to calendar fluctuations.