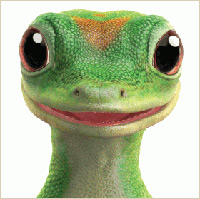 Entitled You're Only Human: A Guide to Life, the 164-page book is published by Workman and retails for $11.95.

It covers topics of interest to the Gecko, including tattoos, flossing, fedoras and haikus.

Workman approached the insurance company’s longtime advertising firm, The Martin Agency, about 18 months ago inquiring whether the Gecko had ever thought about writing a book, says Ted Ward, GEICO vice president of marketing.

“Response to the Gecko has always been overwhelmingly positive, so we thought, 'Why not?' Clearly he has always had a lot of thoughts that we couldn't squeeze into a 30-second commercial,” Ward says in a release. ”That's why this book idea seemed like a no-brainer.”

But writing all those pages didn't come easy, which led to this insight: "If you get writer's block, doodle. If you get doodler's block, write."

While it took teamwork, the gecko gives special thanks to Steve Bassett, The Martin Agency creative director on the GEICO account.

"This book took me deep into the psyche of this beloved advertising icon," Bassett says. "And it really made me think. Like when he asks, 'Why don't psychics ever win the lottery?' You've got to admit, that's a great question."

GEICO is promoting the book via a trailer that can be seen here, as well as on Twitter and Facebook.

In the book, the Gecko makes curious and interesting observations on everything from dreams to job interviews to even include people's reaction to talking animals.

"I'm really not sure what all the fuss is about," the Gecko writes. "Lots of animals talk, including humans. The bigger question is, what do you have to say worth listening to?"