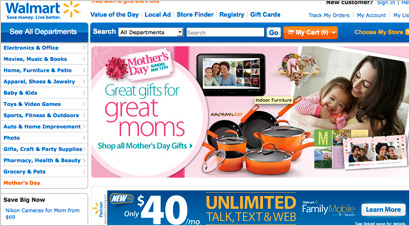 Walmart.com is introducing a new home page, and says it will begin testing in-store delivery lockers later this year, to make it easier for shoppers to use its popular “ship to store” option.

The new efforts are part of its broader goals, Neil Ashe, Walmart’s EVP, as well as CEO of its global ecommerce division, tells investors in a presentation:  “Ecommerce is the next growth engine for Walmart. We want to know what every product in the world is, who every person in the world is, and then connect them.”

He says the new home page “highlights how we think people are shopping, focusing on the way you search, a new trending section for the way you browse, and finally a store experience: How can you find it near you?”

That reflects a shift in the retailer’s thinking over the last two years, he says. “There used to be conversations about channels -- are we omnichannel? Are we multichannel? Are we metachannel? And those are exactly the wrong questions, because that’s looking at the world from our perspective, not the customer. We need to look at things from her eyes. Are we satisfying her when, where and how she likes to be served?”

Addressing investors attending the Barclays Retail and Consumer Discretionary Conference, which was also webcast, Ashe says smartphones are continually driving its innovations. “More than half of our customers now have smartphones,” he says, adding that shoppers can now switch their Walmart app to in-store mode in more than 200 of its stores. The app then provides store maps, in-stock information, and allows people to scan items and check themselves out as they shop. “We’ve committed significant resources to mobile,” he says.

Other innovations include allowing customers to pay cash -- “something no other Web site allows them to do.” Many of its customers are unbanked, so allowing them to order online but pay in-store is important. Right now, he says about half of the merchandise ordered on the Web site is shipped directly to a store.

He says its decision to roll out store associates credits this year has also paid off, lessening any internal sense of physical stores competing against the Web site. “So let’s say you are the store manager of SuperCenter 5260. You get revenue credit for any ecommerce sales in your area,” he explains.

Finally, he says the company is committed to using e-commerce for two goals. “Piece A is obviously to create a stronger bond with our customers. Piece B is that we can reach out to new customers -- people who either don’t live near a Walmart, or just choose not to shop in our stores.”