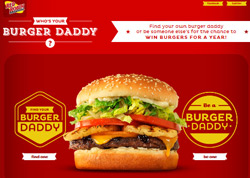 They can seek out a Burger Daddy willing to buy them a Red Robin gift card or a Red Robin burger by posting a request to Facebook or Twitter, choosing from a selection of tongue-in-cheek burger-grams explaining their reasons. (Examples: “Because diamonds are expensive and mean nothing at lunch” and “It’s the least you can do for hitting on my sister.”)

Or they can opt to become someone’s Burger Daddy, posting their offer with a message chosen from another set of reasons (e.g., “Because it’s my best shot at impressing you for under $20”), and follow through by purchasing a Red Robin gift card or taking the friend to a Red Robin.

Fans who participate can enter a sweeps for a chance to win one of four weekly prizes: Red Robin burgers for a year (12 $30 gift cards). Members of the chain’s Red Robin Royalty loyalty club get a double sweeps entry.

The social campaign is part of Red Robin’s new “A Million Reasons” advertising campaign -- from the chain’s new creative agency, Vitro -- which aims to help create a more adult-oriented image for the brand.

That, in turn, is part of a brand transformation strategy initiated a year ago by CEO Steve Carley, designed to woo adults looking for a casual dinner destination, as well as reinforce Red Robin as a “go-to” family destination. Toward those goals, Red Robin is updating its restaurants’ décor and service, replacing plastic burger baskets with china, offering more sophisticated alcoholic beverages in nicer glasses, introducing appetizers tiered at $3, $5, $7 or $9, and testing premium-priced burgers.

With the tagline “24 Burgers. A Million Reasons,” the campaign highlights Red Robin’s menu variety. Its series of 15-second TV ads feature a new face: A young, adult woman who in each spot highlights one of those reasons (like the chain’s “Bottomless Steak Fries” offering) while sitting in a busy Red Robin restaurant. (One recent spot is keyed to the “Burger Daddy” theme.)

The re-imaging and marketing efforts seem to be paying off: Red Robin’s same-store sales have been up in recent quarters.

This year, Red Robin plans to add another 20 locations to its existing 475 in the U.S. and Canada, including several featuring its new, smaller-size, fast-casual “Burger Works” format.