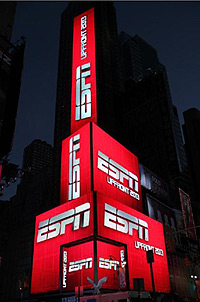 ESPN will look to reach advertisers heading in and out of its upfront event Tuesday with some 21,000 square feet of LED signage. The network has linked with a fellow Disney unit to take over three Times Square displays near the Best Buy Theater.

Appearing on a trio of buildings, the high-def signs will plug “ESPN Upfront 2013” and light up with the network’s red hue. One towers above the American Eagle store, another wraps around the building with the “Good Morning America (GMA)” studio and a third shines on the Disney Store location.

The “ABC SuperSign” -- attached to the “GMA” locale -- will carry “Welcome” and “Thank you for coming” messages for marketers. With 12 panels, the 15,000 square-foot American Eagle sign is the largest of the three by a long shot.

Separately, ESPN will park its new “SportsCenter” bus outside the upfront event, partly looking to attract a sponsor. During the presentation, a feed of network personality Sal Paolantonio “reporting” live from the bus will appear on-screen in the theater.

DirecTV has sponsored an ESPN bus affiliated with “College GameDay,” while Corona has been affiliated with a “Monday Night Football” version. With "'SC' On The Scene” appearing on the side, the “SportsCenter” bus will travel to various sporting events, while a studio inside will allow for on-air feeds.

Before it takes off for, say, the U.S. Open or Major League Baseball All-Star Game, it will spend the week in Manhattan, passing agencies and other upfront events.

The Times Square signage is sold by ABC Regional Sports & Entertainment Sales. ESPN offers some packages to advertisers that include the bright lights.

On Tuesday, the displays will feature the ESPN logo for an hour before and another after the presentation. “It’s upfront week -- you want to surprise and break through,” said ESPN sales chief Ed Erhardt.