Carriers Come Together For 'It Can Wait' 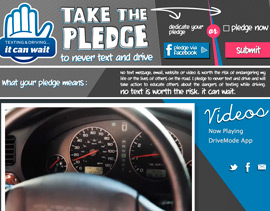 The four major wireless carriers in the U.S. will take a (partial) break from trying to woo each others’ customers this summer to unite under a common cause: Eliminating texting and driving.

Verizon Wireless, Sprint, T-Mobile (and 200 other organizations) have signed on to AT&T’s 3-year-old “It can wait” campaign, supporting a new national ad campaign that humanizes the potential disastrous effects that can result from texting while driving. Other elements of the campaign include a nationwide driving while texting simulator tour, retail point-of-sale materials and social media efforts.

“The intent of the ‘It can wait’ campaign was truly about saving lives,” Rudy Wilson, vice president, brand management and advertising for AT&T, tells Marketing Daily. “That was the purest reason we got involved. After that success, we felt we needed to take it up a notch, and if we really truly want to have an effect, we needed to have more partners.”

The effort kicks off next week with a co-branded television advertisement supported by AT&T, Sprint, T-Mobile and Verizon Wireless. The ad tells the story of Xavier Davis-Bilbo, who, when he was 5 years old, was hit by a car while crossing the street. The woman was texting while driving, and the accident left Xavier paralyzed from the waist down.

“We looked at a lot of different ways to be relevant and cut through the clutter and be effective,” Wilson says. “In a focus group [with teens] when we were trying to explain the situation, they had the awareness of it, but they didn’t understand the consequences of the [behavior]."

While branding is minimal in the commercials, an end title shows the message is supported by all four major wireless carriers.

“That’s why today is a monumental day in this movement,” Wilson says. “It’s not just about one company coming to the world and saying it’s a problem. You’re seeing companies that are normally competitors coming together and joining resources to say this is a problem. That makes someone stand up and say, this is an important position.”

Other elements in the campaign include a nationwide tour of a driving simulator to bring to life the dangers of texting and driving (sponsored by USAA), as well as prominent displays in AT&T, Verizon, Walmart, Sprint, T-Mobile, Best Buy and RadioShack stores. The message will also be featured on more than 500 Clear Channel radio stations and the Goodyear blimp, and device makers Pantech, HTC and Samsung will include the AT&T DriveMode app (which prevents texts from being used while driving) on their phones for AT&T customers.

Social media will also be a major component of the campaign, with advocates delivering daily reasons why texting and driving can wait.

“There’s social media from the companies and we’ll put our own posts and tweets and sending fans to friends,” Wilson says. “What we’ve found successful is to find other influencers out there to also share the messages and encourage their fans to participate.”

The campaign will culminate in a national day of action on Sept. 19, where advocates will work with their communities to prevent texting and driving, encouraging everyone to make a commitment to take the “It can wait” pledge and encourage others to do the same.