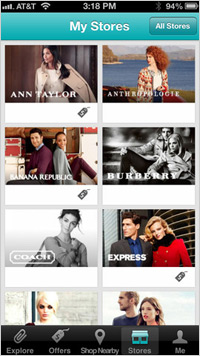 Swirl entered the mobile shopping fray last year with an iPhone app allowing users to learn about fashion deals near them. It covers more than 200 retailer brands, including Macy’s and Nordstrom.

Now the company is adding an in-store feature to its app that delivers exclusive content and offers while users are shopping at participating stores.

Retailers can set the sensor range from two to 600 feet, depending on the level of targeting they want around particular products.

Given privacy concerns around mobile-location tracking, Swirl also emphasizes that users opt in to receive offers when initially installing the app. Customers redeem the offers via unique flash sale codes they show to sales clerks at checkout.

“The goal of the Swirl platform is to impact the business by driving store traffic and increasing conversion,” said Rob Murphy, vice president, marketing at Swirl. “We help retailers engage with shoppers via the Swirl consumer app, as well as via an SDK (software development kit) that retailers can use to add in-store functionality to their own existing mobile apps.”

Swirl competes broadly with fashion-related apps like Gilt Groupe, Lyst and Rue La La, as well as in-store shopping apps such as shopkick, whose mobile technology has been adopted by national retailers including Target, Best Buy, Macy’s and Toys R Us. Similar to Swirl, shopkick’s system is alerted as soon as a user enters a participating store.

But Swirl believes its focus on delivering offers based specifically where shoppers are browsing in stores differentiates it from shopkick’s rewards model that awards users points based on activities such as visiting a store or scanning certain products.

The company’s app to date has earned a 3.5 out of five-star rating in the App Store based on 141 responses. On the funding front, the company so far has raised $6 million from high-profile investors including SoftBank Capital, General Catalyst Partners and Longworth Venture Partners.