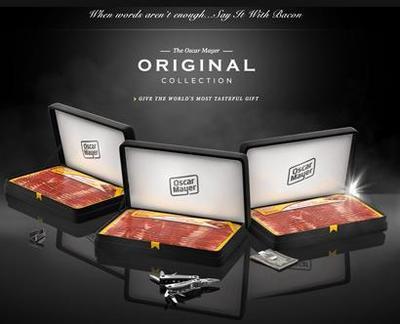 This marks the first time the brand has sold its products outside of brick-and-mortar grocery retailers, as well as its first products meant for gift-giving.

The tongue-in-cheek approach makes the most of the surprising gift idea. Gift-givers can select one of three themed packs -- each including 18-20 slices of Oscar Mayer Original Bacon, plus other goodies…and each lavishly packaged in a velvet jewelers box.

The three gift packs are being sold exclusively on a “Say It With Bacon” site, which showcases the boxes in a graphic design that parodies jewelry ads, with a script headline: “When words aren’t enough….Say it with bacon…Give the world’s most tasteful gift.”

* “The Commander” ($22), which comes with a stainless steel money-clip engraved with the words “Bringin’ it Home” and an image of a bacon strip. The sell copy: “His voice is steady. His gaze is steely. And his touch? It’s, oh, so gentle. Surprise the captain of your heart with this extremely rare gift from the Oscar Mayer Original Collection…You’ve never seen him cry – until now.”

* “The Matador” ($28), which features a set of “dashing” bacon-strip design cufflinks. (“His silky movements and fiery embrace have stirred your embers more times than you can count…”)

* “The Woodsman” ($25), which includes a “rugged, 12-function multi-tool” with a bacon strip image carved into the handle. (“His hands routinely move mountains, fell trees, and tug at your heartstrings…”)

The brand also has posted an equally over-the-top video on YouTube and the gift site, featuring an adoring female presenting her man with one of the bacon gift packs as they ride through the park in a horse-drawn carriage, followed by a paean to the nobility of bacon delivered by Oscar Mayer’s “bacon cut and design chief.”

Oscar Mayer also suggests that the gift packs are perfect for any special occasion for “the men in our lives,” like birthdays and anniversaries.

The site, anticipating that some consumers might wrongly take the whole thing for a put-on, assures them in a Q&A section that the gifts are for real.

Those who might encounter a temporary sell-out of their bacon gift-pack of choice are advised to “stay calm,” and assured that, “While our bacon gifts are extremely rare, they are replenished during their limited availability. Follow @OscarMayer on Twitter for restocking alerts, or send ‘The Messenger’ now.”