Boom! Consumers Stocking Up On Fireworks 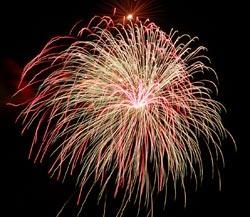 Party on, patriots. According to new data from both Visa and Mintel, Americans are serious about getting their independence on this holiday weekend.

Visa reports that more people intend to mark the day, with just 12% reporting that they won't celebrate (compared with 21% last year.) And spending is set to rise 58% for this year, with celebrants spending an average of $300, compared with $190 last year. (Those who plan to spend the holiday at home say they intend to spend $169, while the 10% taking overnight trips estimate that they will spend an average of $1,161.)

The Visa survey found big regional swings, with those in the Northeastern expecting to spend $454, Southerners $339, Westerners $206 and Midwesterners $195.

While 40% of all those who will be celebrating say they will buy fireworks, planning to spend an average of $28, Midwesterners and Southerners will spend twice as much as either Northeasterners and Westerners. In the South and Midwest, they are planning to spend $35 and $36 respectively. (And men are spending an average of $39, while women plan to spend $18.) Visa says its survey is based on just over 1,000 adults.

Meanwhile, Mintel says 29% of Americans attended a Fourth of July celebration within the past two years, and that 18% made a special dish to bring with them. That makes it a bigger cookout event than Memorial Day (with 28% attending an event, or Labor Day, at 14%.) And for Fourth of July events, some 23% bought a special food purchase, while 19% bought some kind of alcoholic beverage.

Meanwhile, Americans are even more inclined to take the purchasing path to patriotism. A new YouGov Omnibus survey reports that 47% of consumers say that “Made In The USA” branding would make them more likely to buy the product. Some 32% say they would definitely buy that product. Women were more likely to say so than men, and older consumers more likely to “definitely” buy USA than younger shoppers. And 19% said that USA branding would not impact their purchase decision.

Their overwhelming reason is the belief that such purchases help the economy (81%), followed by a “I think I would get a superior product” (42%), and then “I think it is important to be patriotic” (38%).