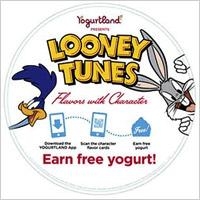 Between July 8 and Sept. 15, the chain is offering six new flavors, each inspired by one of the characters.

Each character will also have a collectible spoon and cup, and Yogurtland will sell a line of co-branded merchandise that includes notepads, pencils, key chains and melamine bowls.

The promotion will kick off with character appearances, prizes and free yogurt parties on July 8 at select Yogurtland locations.

There's also a mobile element: Consumers can use Yogurtland's mobile app to scan QR codes on in-store flavor cards. They will earn four ounces of free yogurt after collecting four character codes, and six ounces after collecting all six codes.

The summer promotion's hashtag is #FlavorsWithCharacter.

Yogurtland currently has more than 225 locations in the U.S., Guam, Mexico, Venezuela and Australia. Fifty more locations are scheduled to open over the next six months.