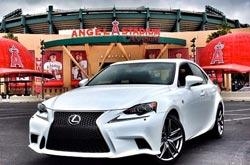 Following the mid-June launch of Lexus' campaign for the new IS sports sedan at the U.S. Open, the Torrance, Calif.-based luxury brand is partnering with Source Interlink Media performance-vertical titles Motor Trend, Super Street, Modified, and Import Tuner, as well as digital art and style destination ArrestedMotion.com. The purpose: to use the new Instagram 15-second video platform to get some buzz going for the performance car.

The program involves Lexus giving Kogeto "Joey" panoramic cameras to editors of the different titles. The task: put the 360-degree cameras on the cars, and do photos and video incorporating the car during test drives.

The fruit of the program is hitting Lexus' Instagram site, which went live on Tuesday.

Brian Smith, VP marketing for Lexus, said in a statement that the Joey images are meant to grab the attention of  performance-attuned car buyers because the program offers a take on the new car that diverges from the typical firehose from the company.

In addition to being on the Lexus Instagram site, the "Joey" footage will be on Lexus Facebook page, as well as the auto magazines' own Instagram sites, per a statement, which says the company will choose photos and 15-second video cuts for once-per-day posting on the site.

Complex Media's ArrestedMotion.com took crews to design spots in Los Angeles with the 2014 IS -- Joey camera onboard -- to do design portraits. Again, Lexus will take those 15-second video cuts and the photos for its Instagram page.

The automaker says that after all of this content is uploaded to social, it will upload to Instagram another compilation called #LexusInstafilm comprising photos that particants captured during an invitation-only ride and drive of the 2014 IS F Sport variant at Angel Stadium in Anaheim, Calif. last month. "We then invited enthusiasts to attend the shooting of the #LexusInstafilm," says a spokesperson, who tells Marketing Daily  that the motion-captured images will be digitally stitched together later in July.

The spokesperson says the car is selling well off the blocks. "All of our dealers have IS models in stock, and in its first weekend (in late June), more than 500 were sold." She says those numbers pushed Lexus to its best non-holiday sales weekend in six years.

"The plan has been to launch with this special partnership and then we will determine if we’d like to coordinate other opportunities," she says, adding that IS is typically the youngest vehicle in the luxury industry (in the low to mid-40’s). "As a result we will target consumers in their 30’s and 40’s primarily, and skew slightly male with our targeting. Because our target audience is younger, digital will play a big part of our IS marketing plan."