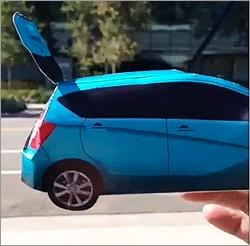 Nissan is in the midst of rolling out the Versa Note to dealers. It’s a car that is completely redesigned with a new look outside, a big interior, and a campaign, via AOR TBWA\Chiat\Day, with a "Door to More" theme. Part of the effort involves Instagram and Vine, where consumers can upload videos that incorporate a cutout of the car. The big prize: the top three videos will be integrated into ad creative as part of the major launch campaign this fall.

Actually, Instagram was something the company had not planned on using, until the platform recently launched its 15-second video enhancement, notes Erich Marx, director of social media and interactive marketing at Nissan’s Franklin, Tenn.-based U.S. sales and marketing. The automaker, he says, had to rejigger the campaign. "Midstream of the program, which was set to launch July 1, the 15-second app enhancement happened. We had to rethink. One option was to just stick to our plans. Vine is the fastest-growing app in the space. But we and Chiat understand that the social space is all about being flexible and adaptive, so we incorporated Instagram into it, and moved it to July 10 instead of the first."

He tells Marketing Daily that in essence, the campaign will be an experiment based on what happened last year with Sentra, in which Nissan found a lot of fan activity on Vine and waded into the waters. "Since Instagram is two-and-a-half times longer than Vine, the videos will be totally different. It's really going to be a beta test on which one people gravitate to."

The campaign includes a promotional Web site, YourDoorToMore.com, that gives details about the program and and some sample videos put together by Chiat. The site offers different printable variations of the Versa Note cutouts for peoples' Vine and Instagram videos. Among the six winners of the video competition, three will get $1,000 Amazon.com gift cards. The other three get their creative in the campaign.

Marx says it's up to Chiat how to incorporate the winning three videos -- be they Vine or Instagram -- into the creative.