Johnsonville: Sing For Your (Sausage) Supper 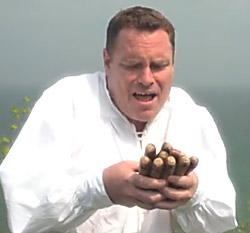 Nothing says love like an ’80s-themed power ballad. In a new summer promotion, Johnsonville Sausage’s spokescharacter, “The Brattender,” is laying out his love in a new music video/ode to encased meats.

The video, which features the character walking on a beach while singing his original song, “Don’t Pierce the Brat,” is part of a social media effort to encourage people to perform their own versions of the song for a chance to win $5,000 and bratwurst for a year.

“Johnsonville is a fun brand and a social brand, and it’s about celebrating that [during] the grilling season,” Stephanie Dlugopolski, manager of PR and social media for Johnsonville, tells Marketing Daily. “Between our enthusiasts and our social community, we’re inviting them to engage with us in a different way.”

Found on the company’s Facebook page, the video depicts the character on a beach, with a full grill nearby. “Since the day it was made, it’s been faithful and true,” he sings. “All that juicy, tasty flavor, it’s been saving it for you.” Among imagery of sitting barefoot on the beach and skipping rocks, the Brattender eventually karate kicks away to barbecue forks as the song hits the chorus: “Don’t pierce the brat/Don’t let the tears run out/Yeah, we’re hopin’/You don’t cut it open/Just because you doubt.”

“There’s always been this irrational passion about bratwurst,” says Jamie Schmelzer, vice president and managing supervisor at Cramer-Krasselt in Milwaukee, which created the campaign. “The ’80s power ballad is a way to show that off in a passionate way.”

Through the company’s Facebook page, consumers are encouraged to download the video and lyric sheet to create their own version of the song for a chance to win the cash and sausage prize. Style, creativity and passion (rather than singing or music prowess) will be the main criteria for judging the contest.