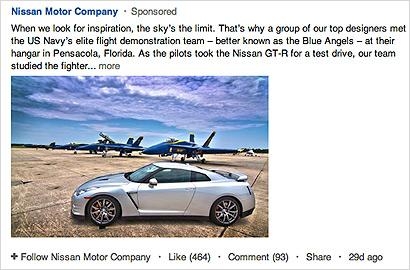 LinkedIn on Tuesday formally launched its new native ad units that appear in users’ feeds and look like regular posts except for the “Sponsored” label at the top. The company began testing Sponsored Updates six months ago on a limited basis with brands including Xerox, Nissan and Adobe, but is now rolling them out across its 225 million users worldwide.

LinkedIn CEO Jeff Weiner indicated during the company’s first-quarter conference call in May that it was pleased with early results from the ads without elaborating. Today, LinkedIn provided a few examples of campaign performance with Sponsored Updates.

It noted, for instance, that “decision makers” who saw an Adobe ad highlighting results from its 2013 Digital Marketing Optimization Survey were 50% more likely to agree the software maker is shaping the future of digital marketing. A separate campaign by Australian telecom firm Telstra led to a 12% increase in the rate it attracts new followers on LinkedIn.

And HubSpot, which makes inbound marketing software, generated 400% more leads from small and medium-sized businesses using Sponsored Updates compared to other paid channels. “This was also achieved at a cost-per-lead aligned to their other business goals,” according to LinkedIn.

Other brands using Sponsored Updates so far include Allstate Insurance, Box Inc., Domo, Charles Schwab & Co, General Electric, and Mercedes-Benz. The new ad format is available now to all advertisers that work directly with LinkedIn sales reps, but will be extended to the self-serve platform by the end of July.

Sponsored Updates are priced on either a CPM or cost-per-click (CPC) basis and are available in 20 languages across the 200 countries and territories where LinkedIn has members. The ads can be targeted to audience segments based on the company’s wealth of professional profile data, and LinkedIn promises comprehensive analytics and campaign reporting.

If newsfeed ads on Facebook and Promoted Posts on Twitter are any guide, Sponsored Updates should become a key new ad stream for LinkedIn as it pushes content marketing “at scale” for the first time, as Weiner said when discussing the new ad unit in May. He noted that it was the first ad product its sales force will sell across both desktop and mobile, underscoring the importance placed on its success.

LinkedIn on Tuesday, however, also reassured that users’ feeds wouldn’t suddenly be awash in ads. “While your LinkedIn homepage experience…will not be dramatically different, you may occasionally see Sponsored Updates in your feed. Most of your updates will continue to be organic information from your network,” stated a blog post by LinkedIn Product Manager Gyanda Sachdeva.

Users can also close Sponsored Updates by clicking a “Hide” button that appears when hovering over the right corner of an ad. A better user experience would be to have that button appear as a default option like those for “following” or “sharing” regardless of a user’s actions. But that’s the type of change that could come as the company gets more feedback on the ads in the coming weeks and months.