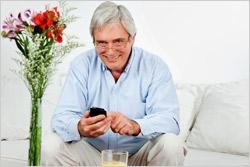 Who says seniors are not embracing the digital revolution?

If not to the same degree as younger consumers, new research shows that Americans over the age of 50 are increasingly making digital media part of their lives.

Case in point -- a majority of Boomers (60%) say watching online video has become an important part of their day, the AARP reports, citing data from a recent Google/Ipsos MediaCT U.S. study. (A little slower to embrace the new medium, 40% of seniors also see online video as important to their lives.)

What's more, videos have emerged as a key driver of action and response among those 50 and older.

In fact, 75% of Boomers and 68% of seniors report taking some sort of action after viewing a video. A full 57% were inspired to visit a retailer, for instance, while 37% reported calling a business or organization as a result of seeing a particular online video.

"Since [older consumers] research topics of interest, including shopping and health and wellness, marketers in these and other areas have a tremendous opportunity to enhance their ad buys with digital,” Bradbury said.

Video also motivated 35% of Boomers to search for more information online, while video encouraged 41% of seniors to forward a link or video to someone.

YouTube is by far the preferred video source among Boomers and seniors -- with 84% and 71%, respectively, saying they would be lost without the site.

Beyond video, 78% of Boomers and 52% of seniors are engaging with online content on a daily basis.

Search is one of the top online activities for Boomers (82%) and seniors (75%), while 97% of Boomers and seniors rank Facebook as their number one most-used social networking site.

As such, Boomers (84%) and seniors (77%) now view the Web as the number one source for gathering a variety of content, including news, weather, information about health and wellness, and shopping.

Also of note, older consumers are increasingly purchasing connected devices to get their digital fix. Indeed -- in what represents a huge opportunity for the industry -- one in five seniors say they are likely to purchase a smartphone or tablet device within the next year.

Meanwhile, multitasking like the rest of population, older Americans (78% of Boomers, and 66% of seniors) are using multiple devices at once, the AARP reports.