From Reach To Relevance

My experience is representative of the evolution in advertising, and it is analogous to the transition from carpet bombing to shotguns to lasers. Each new weapon in the arsenal is increasingly precise, but as a consumer, I still don’t enjoy being a “target.” So as we look to the future of advertising, the real opportunity for advertisers is not in becoming ever more focused. Rather, it lies in leapfrogging over the military model of advertising and into one in which the power relationship between advertisers and consumers is reversed, and the relationship between them is founded on respect and relevance.

“But behavioral targeting is all about relevance!” some advertisers will protest. After all, wasn’t that the promise of the search engines fifteen years ago, and of geo- and app-based mobile advertising today? Isn’t the whole point of these technologies to make it easier to serve up ads that individuals may actually be interested in, when and where they may be most germane?

Well, sort of. But we’ve all had the experience like buying a video game for a nephew, then being dogged by “Grand Theft Auto”ads everywhere we turn online for the next six months. And even if it’s ourselves we’re shopping for, we only occasionally make major purchases like cars or refrigerators, but are stalked by those ads from the moment we first begin our online research. And the move to reliance on mobile devices has only exacerbated consumers’ sense of being invaded, precisely because these devices are so personal. The display ads that pop up in our mobile apps, filling half the available screen space, feel to many consumers like squatters who have planted themselves in our personal space and are impossible to dislodge.

This is more than a rant. It’s a rant informed by data suggesting that Americans across multiple demographics not only resent the intrusiveness of advertisers’ attempts to be relevant, but would actually pay a premium to shut them out. We recently surveyed 2,000 Americans representing different key demographics. We asked them four questions to elicit their feelings about behavioral tracking and targeting.

Not surprisingly, the majority of respondents would employ a Do Not Track mechanism when online.

If you could click on a Do Not Track button to prevent browsers from capturing your online searching and purchasing history, would you? 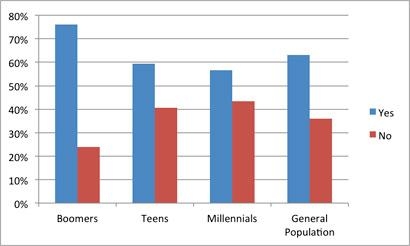 More telling are the responses to the forced choice questions.

Companies want your demographic and browsing history to target ads and sell your data to other companies. Would you: 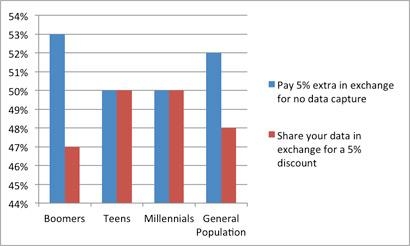 Even among teens -- a demographic assumed to be least concerned with privacy and most eager to save money -- 50% would be willing to pay a premium in order to keep their personal data and activity private and avoid the “benefit” of targeted advertising. Cost savings are no incentive to discount-craving Americans if the alternative is being able to conduct a simple transaction with retailers on their own terms in which the only thing they have to hand over is their money.

Imagine that you could limit an online retailer to capturing only the personal data you explicitly allow them to collect. Would you: 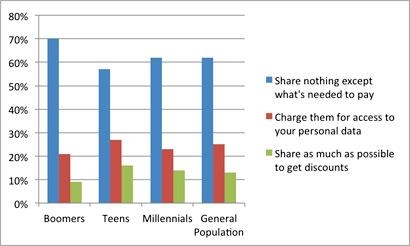 Indeed, fewer than 30% of respondents in any demographic would choose to receive unsolicited promotions based on their search history -- the method advertisers currently rely on most to be relevant.

Imagine that you are intending to buy something. Would you rather: 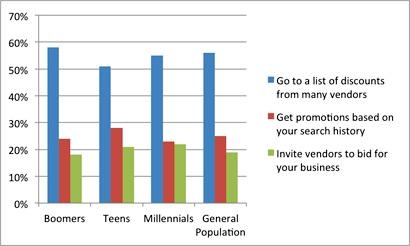 The point of this research is not to suggest that advertisers should give up, or simply resign themselves to be necessary but disdained. Consumers want and welcome contact with companies and brands, but on their terms. That’s why the same people who hate mobile ads love QR codes; the latter let the consumer initiate the contact with the brand, based on both their emotional and situational needs.

No -- the future isn’t in no advertising, but in a shift in advertisers’ orientation from reach to relationship, from response rate to relevance. Imagine a future in which the ability to initiate contact resides primarily with the consumer. Companies and brands still advertise, but their objective in doing will be not so much to push out their message as it will be to make themselves availableto consumers at the point that they are actively researching products.

To paraphrase Doc Searls (in his introduction to "The Intention Economy"), the quest for advertisers need not be primarily to capture people’s attention, but to engage with them in a meaningful way at consumers’ moment of intention. That alignment of advertising availability and consumer purpose takes relevance to a new place, one where the advertisers’ touchpoints may be fewer in number, but far more satisfying for both parties. Consumers won’t feel beleaguered, advertisers can connect with potential buyers at the point they are most interested and receptive, and the encounter will be transformed from a competition for attention to a more mutually satisfying opportunity for relationship-building.

If situational-based encounters are one key to greater relevance, enabling advertisers to have a deeper, richer, more holistic understanding of consumers is the other crucial ingredient. By actively soliciting consumer input, and by viewing customers as advisors rather than simply as buyers, advertisers stand a much better chance of speaking to their real emotional and functional needs. Armed with that understanding, they will be better able to focus on creating positive brand experiences, not shouting at consumers, and more adept at supporting their interests and causes.

Finally, as production costs decrease, channels for placement increase, and need for relevancy explodes, advertisers will be able to honor and connect with the diversity of human experience with micro "campaigns" disseminated through multiple channels. No longer will they have to think of “mom” simply as person doing laundry and cleaning, because single mass-market creative such as the 30-second television spot will be replaced with volume of various creative treatments and channels. Advertisers will be able to act on what they already know, which is that no consumer segment or demographic is monolithic.

Now that’s something Mr. Schlack can get behind.