Consumer Satisfaction Up At TV Sports, News Sites And Apps 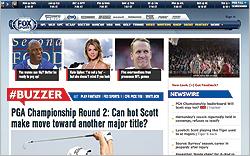 In a growing digital video world, Apple’s iTunes is still key -- at least in terms of consumer satisfaction.

A new study shows that when it comes to satisfaction with digital platforms, Apple iTunes scored the highest measure of any streaming video company with a score of 80, per consumer analytics company Foresee. Netflix and HBO GO were next, tied at 79. Amazon Instant Video scored a 78, while Hulu Plus and Crackle came in at 75.

Looking at TV-related sports mobile sites and apps, the study showed that Fox Sports led with a 79 score, while the average for all sports apps stood at 77. ESPN -- a leader in TV sports -- scored a 77, along with Sports Illustrated and Bleacher Report. CBS Sports had a 75 score, followed by Yahoo with a 74. The study says the most satisfied group in the sports category is “customers who reported to frequently view ads,” which earned an 81 score in satisfaction.

When it comes to TV news sites, Fox News and NBC News are tied for first at 79. Google, Reuters, The Wall Street Journal, and USA Today earned a 78 score. CBS News had the lowest score, with a 73 satisfaction number.

The study also shows the flip side when it comes to news sites/apps: Only 20% of those surveyed strongly agree they could trust the content on the news mobile site or app they visited.

Consumer satisfaction has a lot to do with accessing premium content with few glitches and playback errors, says Foresee -- which is also the main driver of satisfaction for streaming Web sites and apps.