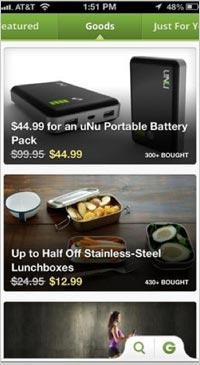 Claiming that daily deals pioneer Groupon is “uniquely positioned to lead in the world of mobile commerce,” CEO Eric Lefkofsky announced at its quarterly earnings call last week that almost 50% of company revenue is now coming from purchases made on mobile phones. The company says it is successfully migrating from its original email push model to a “pull” model where people browse and search on their phones for local deals. More than 50 million people have downloaded the Groupon mobile app globally, and the company recorded 7.5 million downloads in the second quarter alone.

Direct email is now responsible for less than 40% of transactions in North America, the company says. They claim that this validates their rollout of a marketplace structure of longer-lasting deals that people browse. Despite the shift, Lefkofsky says: “Despite the fact that our apps are great for browsing deals, we still have yet to change consumer behavior such that the majority of our customers interact with Groupon in real-time on a daily basis. We've made great strides in mobile but we have a long way to go,” he said in a conference call according to a transcript at Seeking Alpha.

The company reported revenue up 7% to $608.7 million in Q2 2013. North American revenue growth was up 45%, however. The number of active customers who purchased a Groupon within the last 12 months was up 12% year-over-year to 42.6 million, 19.1 million of whom were North America.

In the conference call Lefkofsky said that the company needs to “get local right” in order to dominate in mobile commerce. In order for this to work local businesses have to change the way in which they deal with Groupon, focusing more on persistent deals that live in the marketplace rather than the daily deal that is driven by an email. “We believe we are better positioned than any other company to redefine the local and mobile commerce landscape,” he said.

He added that mobile users are also the most engaged, in that they tend to search and browse more often and also make purchases more often than their desktop-based counterparts. “People are buying more and a big part of that is being driven by mobile,” he said.