Don't Go There! Mobile Geoconquesting On The Rise 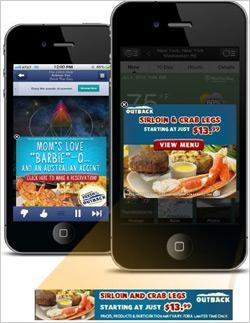 Mobile media brings the war over consumer consideration and decision-making on the ground and on top of the point of sale. And so the next great stage in mobile targeting may involve brands aiming to dissuade consumers from buying at nearby competitors.

According to local mobile ad platform xAd, almost a third (32%) of advertisers using the most sophisticated kinds of geotargeting (usually more granular than ZIP, city or DMA) targeted the location of their competition in order to drive consumers to engaging with their alternative in Q2. This was up from 22% of campaign among so-called “precision geotargeters” in Q1.

Geoconquesting can take two forms, says Monica Ho, VP of Marketing xAd. “The most popular takes a user's current location when they are around a competitive location to serve them a competitive ad.” But conquesting can also target behaviors and aim ads at people who have gone to a certain set of locations in the past that identify them as good for poaching.

A recent campaign for Outback Steakhouse aimed mobile ads at people within a 1-mile radius of the brand's restaurants. But it also aimed messages at people within 5 miles of competitor locations. According to xAd, the campaigns performed 80% better in click-throughs than industry averages. The geoconquesting ads performed on par with ads served to loyal customers. But it was in post-click activity where the more tightly targeted campaigns showed special impact. The geoconquesting campaign resulted in an 11% lift over the general geotargeting in the number of people exposed to the ad who accessed a store locator on the Outback landing page.

Although campaigns like these are slicing and dicing areas into small zones for targeting, a national advertiser can achieve scale by running in many locations and being judicious about setting the size of the geofence, says Ho. We do this on a national level, but we might concentrate in areas where sales are down, for instance. And we are running them typically from 4 to 6 weeks.”

Ho says they emphasize measuring beyond simple CTRs and understand the secondary metrics like location look-ups that occur on landing pages. The company will also be working with several partners and their mobile panels to deliver post-impression measurements of how simple exposure to ads with users and in locations lifted store traffic.