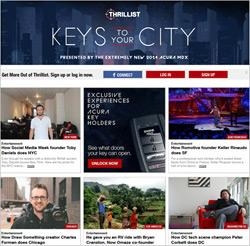 Acura has teamed with Thrillist in a “Keys to Your City” native advertising campaign to promote its new MDX by offering exclusive experiences.

With the tagline: “Get Inspired. Explore Your City,” the program offers unique off-menu items to Acura owners who show their keys. It’s the first time the brand has advertised with Thrillist.

For instance, the first 50 people who produce their Acura key at BrisketTown in Brooklyn will get a free Deckleback. That’s a shot glass filled with deckle brisket and a bottle of Lone Star beer.

Acura doesn’t consider the small number an obstacle to impact. It’s the influencers in Thrillist’s male-dominated 21-34 demographic that the brand is after.

Native advertising is getting a lot of attention this month (see Bob Garfield’s three-part series).

Media brands like Thrillist, however, have been creating such packages since their inception, says Todd Anderman, president of sales, marketing and operations.

“We’re excited about this program because we think it’s really about what Acura is trying to align with and the experiences are only available to Acura customers,” Anderman tells Marketing Daily.  “It’s really about brand integration.”