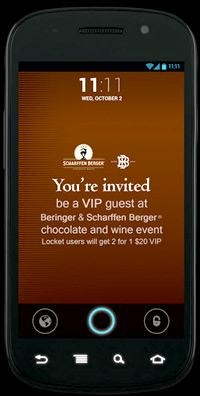 Users see the ads when they open their phones. If they swipe left, they engage with an ad, claim a deal or watch a trailer. If they swipe right, they go straight to their homescreens. But either way, Locket pays them one cent per swipe (capped at three cents per hour, for now).

Founded by three Duke University graduates and backed by $500,000 in funding from Great Oaks VC, Locket seeks to monetize the highly visible and therefore highly valuable lock screen real estate. The basic concept has already taken off in some overseas markets, like Korea, where similar businesses have realized 20% penetration among Android users within a few months of launch, according to TechCrunch -- but Locket is the first to seriously try to implement it in the U.S.

Since its launch, the mobile ad company has created campaigns for eBay, Spotify and Sears, with click-through rates as high as 9.8% and conversion rates as high as 37%, reported Mobile Marketing Magazine.

Some of the ads have teaser messages ("Love chocolate? Love wine? Stay tuned"), or convey branding messages (one shows the artisan chocolate with the message: "Perfectly crafted chocolate"). Others show the actual event invitation information.

Locket users who respond will secure a place on the guest list, with a special two-for-one promotion. Attendees who show their Locket screens at the event will also be treated to a private tasting event with the chocolate brand's founder, John Scharffenberger.

Scharffen Berger (which is also doing some traditional marketing and PR) expects to draw a couple of hundred people from the San Francisco area to the event, reports brand director Sean Maurer.

The lock screen is "a premium piece of advertising real estate," Maurer says. "Consumers have become accustomed to ignoring ads on Web site and game screens. But when you put beautiful ads on the screens that are right in front of them, the potential for engagement, response and brand-building seems extremely promising."

Eventually, marketers should be able to use the technology to reach consumers when they are known to be waiting in line at a store or during other receptive times, he notes.

Maurer stresses that to be effective, ads on this platform (like all platforms) will need to be targeted and relevant. "The model won't work on the basis of giving users those small incentive payments alone -- the ads will need to be genuinely engaging to them," he says.

Scharffen Berger is planning to run another campaign on Locket for the holidays, promoting gift baskets.

According to Locket CEO and co-founder Yunha Kim, the platform has drawn more than 130,000 users since it launched in beta two months ago, and is delivering 8 million impressions daily. "We have an aggressive user acquisition strategy and are targeting to get at least a couple of million users within the next year," she adds.