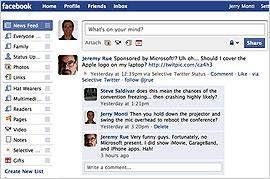 Facebook on Friday said it is rolling out changes to its algorithm aimed at improving the quality and relevance of ads that users see in the news feed. Specifically, the social network is placing more emphasis on feedback it receives about ads, including how often people report or hide an ad.

“For marketers, this means we are showing ads to the people who might want to see them the most. For example, if someone always hides ads for electronics, we will reduce the number of those types of ads that we show to them,” stated a blog post by Hong Ge, engineering manager, news feed ads.

While the updates should ultimately benefit marketers by making ads more relevant, Facebook noted that tweaking its algorithm also means “some marketers may see some variation in the distribution of their ads in the coming weeks.”

Ge explained that Facebook typically tries to show people ads that are most apt, based on factors such as their interests and the brand pages they “Like” on the social network. By contrast, when someone hides an ad, that’s obviously a signal the ad hasn’t hit its mark. “News Feed learns that that person wants to see less of those type of ads.”

Facebook is constantly refining its news feed algorithm. Most recently, it made major changes last month when it began bumping back up posts a user might initially have missed, and showing more updates from the 50 people someone most recently interacted with.

Since Facebook introduced ads in the news feed last year, it has proven that they perform better and command higher ad rates than ads shown on the right-hand side of pages. In the second quarter, for example, news feed ads on the desktop had an average CPM of $4.13 compared to 47 cents for all ads on Facebook. They also had a click-through rate of 0.58% versus 0.11% for Facebook ads generally, according to data from Spruce Media.

The company in the second quarter also began testing retargeted ads in the news feed through its Facebook Exchange (FBX) platform, which also appear to outperform right-column ads in initial campaign results.

Still, Facebook CEO Mark Zuckerberg in the company’s latest earnings conference call touched on the importance of maintaining ad quality in the news feed. He pointed out that ads make up one in 20 of the updates users see in their feeds, without suggesting that ratio would be reduced.

A Facebook spokesperson on Friday confirmed that the latest algorithm changes won’t mean people will see fewer ads overall in the news feed.

The announcement comes as Facebook’s stock just crossed $50 a share for the first time, fueled by higher expectations for ad revenue. JP Morgan analyst Doug Anmuth this week raised his projection for news feed revenue in mobile to almost $3 billion this year and $1 billion on the desktop.