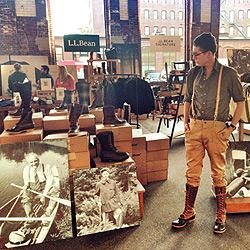 Just in time for the holidays, both Nordstrom and LL Bean are adding pop-up shops in a bid to build sales and broaden their appeal. And retail experts say they expect to see even more pop-ups as retailers try to win back online shoppers.

“While pop-up stores have been around for a long time, they will begin to play an even more critical role in the future,” retail consultant Doug Fleener tells Marketing Daily. “As more sales are done online, physical pop-ups offer new ways to connect with consumers and build buzz.”

Nordstrom is reportedly initiating a program called Pop-In @ Nordstrom, which Women’s Wear Daily describes as “an ongoing series of themed pop-up shops in eight Nordstrom stores and on nordstrom.com.” Ranging in size from 450 to 1,000 square feet, WWD says the first Pop-In will celebrate all things French, stocking a section of vintage Chanel and other designers, as well as items from Merci in Paris, a store that donates 100% percent of its sales to Madagascar. (A spokesperson for Nordstrom declined to comment.)

And L.L. Bean opened a Boston pop-up shop just briefly, driving its Bootmobile down from Freeport, Maine headquarters. Its shop, at a two-day event designed to showcase American craftsmanship, showed off its stitching prowess, and offered shoppers the chance to buy some 60 varieties of its namesake boot.

A spokesperson for L.L. Bean says the next pop-up is planned for NYC Flea in December, and that the retailer will also have a pop-up holiday kiosk in the Natick, Mass., mall, selling Bean Boot colors that will only be available in the pop-up.

Fleener, president of Dynamic Experiences Group, these efforts are more than a marketing tactic. “It can be a retail strategy, as well.” With holiday sales accounting for some 30% of most retailers’ revenue, seasonal pop-ups can add significantly to sales. “If you look at how much e-commerce has taken out of the market, it’s huge. People used to go to stores to seek out something different, and now they do that online. So pop-ups a chance to bring new ideas to customers.” He says that he also expects to see more co-branding pop-ups, such as Nordstrom’s partnership with Nike’s Converse All Stars earlier this year.

Fleener says that as consumers have become increasingly comfortable with limited-edition offerings, including the popularity of flash-sale websites, the bar is much higher.

The bar is much higher, though—consumers expect pop-ups to offer something truly special. “If the pop-up experience is unique, people will seek it out.”