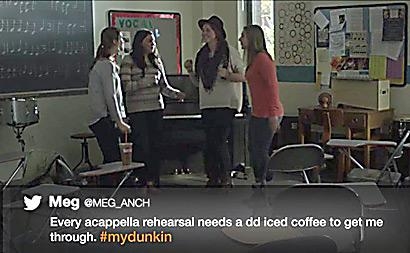 John Costello, president of global marketing and innovation for Dunkin’ Brands (Dunkin’ Donuts and Baskin-Robbins) — who showed some clips from the new TV ads during his Saturday speech at Association of National Advertisers' Masters of Marketing Conference — provided some additional insights about the new campaign in a follow-up interview with Marketing Daily.

"Continuing to grow our coffee business is a top priority for Dunkin' Donuts," says Costello. "Our current campaign, 'What Are You Drinkin'?,' has been a very successful format — it tapped into the passion that our guests have for Dunkin' Donuts coffee. We found that letting them describe what they love about Dunkin' coffee works very well.

"So the question was, how do you leverage an already successful campaign and take it to the next level, particularly in a multi-screen world where people are getting their information from social media, TV, the Internet, etc.?

"What Are You Drinkin' started the conversation by asking the question," he continues. "#MyDunkin takes it to the next level by providing the answer. The new campaign leverages real fans and their social media tweets to demonstrate their passion for Dunkin' Donuts coffee."

"In these ads, we're using real social media comments that we've gotten from our fans to recreate their experiences with Dunkin' coffee," he explains. "Dunkin' Donuts and our advertising partner Hill Holiday reviewed many thousands of social media tweets and posts to select the first fans, then contacted those fans and invited them to share their stories in our TV ads. The ads showcase real customers' love and experience with Dunkin' Donuts."

Each of the two ads actually shows a fan's original tweet, while providing the story-telling context for that tweet with visual footage.

The first ad features "Meg," who is part of an a cappella singing group. Meg tweeted: "Every a cappella rehearsal needs a DD iced coffee to get me through." For the TV ad, Meg was filmed performing with her singing group.

The second ad shows "Nikki," who tweeted: "Just found a @DunkinDonuts pumpkin-flavored K-Cup — best day ever!!!" For the ad, this fan was filmed brewing and enjoying her pumpkin-flavored Dunkin' K-Cup while she checked her email.

The ads end by showing the campaign's #MyDunkin hashtag.

The national advertising will air across network, cable and spot TV, as well as on a range of digital media, according to Costello.

Not surprising, Costello confirms that Dunkin' will (as usual) be integrating social media efforts with the TV ads. "We're very proud of the passion our guests have for Dunkin', and this is an evolution of that conversation, " he says.

While traditional media "remains very important for Dunkin', digital and social media is growing at a faster rate," he notes, adding that both "have to earn their way." (As of August 2012, Costello told Marketing Daily that traditional media still represented over half of Dunkin's total media budget.)

Asked about the results of Dunkin's pioneering use of a TV spot created entirely on Vine, which aired on Sept. 9 during ESPN's "Monday Night Football" pregame show (Dunkin's sponsorship of that show will run all season), Costello said: "We're very pleased with our Vine effort, and with our partnership with the [pregame show]. We feel that our Vine innovation is a perfect way to showcase that partnership in a different way. Our guests love the fun aspect of [Vine], and it's really increased our social engagement, so we plan to continue our Vine partnership."

Does the Monday, Oct. 14 launch date for the new Dunkin' TV ads mean that the pre-game show is the chosen venue for their debut? For that answer, you'll have to stay tuned.