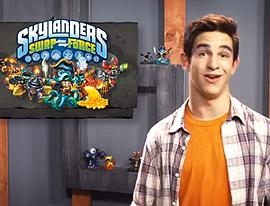 In the third go-around of its hugely popular Skylander franchise, Activision Blizzard is relying heavily on the digital channel to promote Skylanders SWAP Force.

The company is creating a Web series, Skylanders Boomcast, that will offer weekly glimpses to the game's world with news, game play tips and tricks, art, character spotlights and interviews with the Skylanders development team. Actor Zachary Gordon (from the “Diary of a Wimpy Kid” films) will serve as host of the program, which will run through the holiday season. The program will run on Skylanders' YouTube channel.

“In today's marketing landscape, YouTube is the most popular Web site among our target audience of kids 6-11, especially boys 6-11,” Jonathan Anastas, the company's vice president of digital marketing, tells Marketing Daily. “So YouTube became a huge focus of our marketing to this target.”

The webisodes will be focused on the newest game, Skylanders SWAP Force, which allows users to swap top and bottom halves of character figurines (which are then transported into the game) to alter their in-game powers. While the show will not highlight each and every creation possible, it will employ user-generated video to showcase some of the top combinations, Anastas says.

“We’re not going to get into deep walkthroughs in Boomcast; there are YouTube content creators that do that,” he says. “But we'll be distilling [those videos] down in Boomcast.”

Using a YouTube channel to highlight specific areas of the game is a technique Activision Blizzard has employed for other games, including the adult-targeted Call of Duty franchise. Although there is no overlap in terms of the target audiences of C.o.D. and Skylanders (or the content of these two channels), media habits are shifting in similar directions.

“Up until a few years ago, everything [for kids gaming] was about television advertising. But we’re seeing kids’ [media] consumption shifting to branded online channels,” Anastas says. “Six-to-11-year-olds are screen agnostic. They want what they want, where they want it.”

In addition to the Web series, the company has created a whole series of events to promote the game's mid-October release. The company has designated the events as “SWAPtober.”