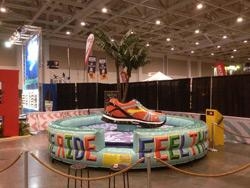 Running gear brand Brooks Running is activating against its multi-year sponsorship of the Rock ’n’ Roll Marathon with an experiential program called “Run Happy Island.” Brooks, which is one of about 19 sponsors of the 31-race series and is official shoe and apparel brand, will have a presence at over a dozen of the events.

The on-site program comprises a 30,000-square-foot exhibition that includes a faux volcano, an ersatz performance group, a "bucking shoe" ride, prize sweeps, and shoe displays and gait-analysis equipment meant to determine the right shoe, machines that are common in running-focused retailers.

The effort includes an in-market brand and event-awareness push that goes to the stores in Brooks' distribution footprint around races, to local bars, and wine tastings, says Angie Corbett, event marketing manager at the company. There's also a retailer incentive program. “We incentivize retailers to try to drive business to the store and get people aware of what's going.” she says, adding that digital elements reside on Facebook, Instagram, YouTube, and BrooksRunning.com.

Corbett tells Marketing Daily that the company has a five-year sponsorship deal ending in 2015 with San Diego-based Competitive Group, the entertainment company and publisher that owns the Rock ’n’ Roll Marathon series and several similar events around the world. "We started doing experiential activations in 2010,” she says, adding that the company first executed on the deal with an exhibition called "Cavalcade of Curiosities" that ran for three years before Brooks replaced it this June with the current grassroots effort.

She says visitor volume is the principal performance indicator for “Run Happy Island.” And the races, she says, can bring in a large crowd to exhibitor venues. "It varies anywhere from 6,000 participants to 35,000 at the Las Vegas Rock n' Roll race with 35,000 runners and up to 80,000 people total walking through the show. And when they come they often bring their families.” The Rock n’ Roll site lists over 500 brands that have a presence at one or more of the races.

Corbett says Rock n' Roll participants, about 65% of whom are women, tend to be fairly new to running and are often doing their first half-marathon. "The majority are first timers -- new runners."

As for pre-race relief, Brooks has a VIP restroom complete with concierges in T-shirt tuxedos, a red carpet and actual flushing toilets. But you can’t use them unless you made a pre-race $150 Brooks purchase at retail.