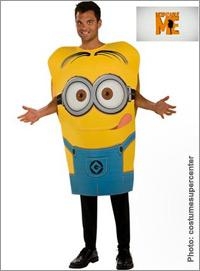 Plan to see plenty of Minions, Minnies, Wonder Womans, and "The Great Gatsby" flappers this Halloween when kids come knocking at the door. That's if you follow searches on engines like Google, Bing and Yahoo.

Experian ranked Minion, the character from the movie "Despicable Me," at No. 1, but analysis reveals heavy search overall on comic book characters and Minnie Mouse.

Google analyzed trending searches on Google Shopping, and also found that Minion pulled in the most searches. Breaking Bad costumes came in at No. 2, with nearly three times more searches this year compared with last. Anything related to the Fox from Ylvis's "What Does the Fox Say" YouTube video, per Google, ranked No. 3. By September it had generated more than 95 million views.

Searches for Duck Dynasty costume are three times higher this year on Google compared with last, trending highest in the state of Texas. "The Great Gatsby" costumes are trending highest in New York and California. Batman is still a favorite, with searches trending up 36% from last year. Following their latest album release, searches for the Daft Punk costume are the highest they have been in the history of the band.

Google searches for costumes on mobile devices grew 67% compared with last year. Interesting that BuySeasons, an online costume retailer, has seen mobile Web site traffic rise during commute hours and on the weekend, although most shoppers use a laptop or a desktop computer to complete their purchase. To reach shoppers across all screens, BuySeasons launched mobile product listing ads (PLAs) on Google Shopping this year, in addition to desktop PLAs, and created mobile-optimized Web pages to make navigating their Web site much easier for mobile shoppers.

Yahoo sees some definite Halloween themes influenced by pop culture, according to Yahoo Web Trend Analyst Carolyn Clark. Don't be surprised to see at your door lots of Minions, Wonder Womans, and Catwomans, along with Duck Dynasty, Miley Cyrus, and Nicki Minaj. Flapper costumes are making a comeback, perhaps resulting from the influence of "The Great Gatsby."

During the past week, Minion, Wonder Woman, Catwoman, monster, Alice in Wonderland, Mini Mouse, Poison Ivy, Minecraft, pirate, and teen beach have been the top searches, according to Yahoo.