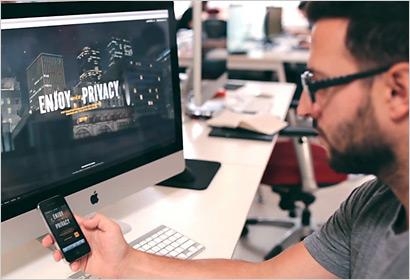 Norton turns smartphones and tablets into windows into other people’s lives in a new, heavily interactive marketing campaign that highlights the dangers of using these devices without mobile security.

The campaign, called “Enjoy Your Privacy,” uses WebSocket technology to link a consumer's smartphone and laptop computer to tell stories of seven interconnected characters by accessing their personal information.

“Very few people use mobile security,” Dave Loew, executive vice president and executive creative director at Leo Burnett, the agency behind the campaign, tells Marketing Daily. “As far as it goes, the phone is more vulnerable and has more personal info on it [than a typical laptop or computer].”

After logging on to the campaign’s Web site, the user is encouraged to visit the same site on their phone using an access code. Once the two devices are linked, the consumer uses the phone to select a character. Once taken to the character's window (represented by a smartphone or a tablet), the consumer is shown a short video that runs on a loop.

They can also access photos, text messages and voicemails to learn more about that character and his or her secrets. (One character, for instance, is carrying on an affair with another character; another is a bookie who gets arrested; a third steals personal information through a public WiFi system.)

"The idea started when one of our art directors had an idea to turn a cell phone into a window, and from that we expanded it into this far-ranging, storytelling experience,” Loew says. “There’s a lot of connection here, which symbolically represents some of the connections in the digital world. Everything you share is out there, and we’re all pretty connected.”

The campaign is intended to get consumers to consider mobile security more seriously, Loew says.

“You can tell people and warn people and tell them about the threats, or you can put the proof in their hands and show it to them,” he says. “The overall feeling is to get people to think about their privacy and their information.”

Norton will begin promoting the "Enjoy Your Privacy" site through its social channels at first. The agency has cut some of the videos into a 30-second commercial that may also run on some digital channels.