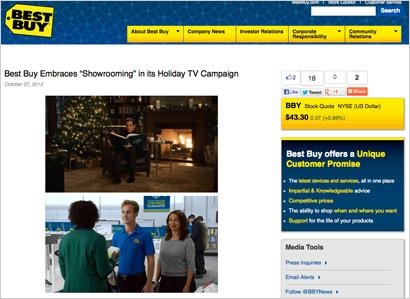 CMOs at the country’s leading retailers are expecting a so-so holiday, reports a new survey from BDO, anticipating a gain of just 2.5%. Last year at this time, CMOs were a little more joyful, expecting a 3.7% jump.

Describing the results as cautious realism, Doug Hart, partner in the professional services firm’s retail and consumer product practice, tells Marketing Daily that this season’s more muted response is at least partly due to the government shutdown, which occurred while the survey was fielded. “But overall, there is a sense that retail is decelerating, following not-so-strong back-to-school sales. Last year at this time, for instance, Target was talking up its holiday merchandising initiative with Neiman Marcus. This year, it’s back to talking about price matching.”

The survey, based on 100 CMOs at large retailers, also predicts that consumer electronics will be the strongest category --albeit the most heavily discounted, adding that Walmart says tablets already account for four out of its top five items in layaway.

Both Walmart and Best Buy are already looking to jumpstart those sales, with Walmart announcing what it calls its earliest holiday specials ever, with an early cyber event featuring the low prices normally reserved for Black Friday and Cyber Monday. The Bentonville, Ark.-retailer says more than 300 “early bird” items are available on Walmart.com, including such electronics as a JVC 42-inch LED TV for $299, 36% off its usual; price; a Xelio tablet for $49, or 51% off, and HP Pavilion Sleekbook Core i3 for $299, a 33% reduction and the lowest price ever for a laptop with an Intel processor.

It’s also tempting shoppers with free shipping for orders over $50 on 99% of Walmart.com items, and more than half of Marketplace items, adding that it has tripled the number of items available for same-day in-store pickup to 70,000.

Hart says these efforts are in keeping with industry trends over the last several years, with such retailers as Amazon and Target gaining market share by stretching out the selling season. “This may be new to Walmart,” he says, “but not to the industry.”