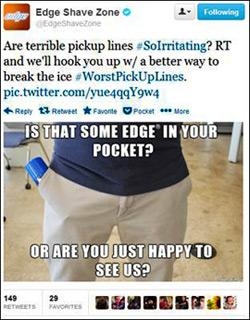 The world is full of irritations, but luckily for men following Edge Shave Gel on social media, there are some solutions.

Following up on a 2010 effort, the company relaunched its “Anti-Irritation Campaign,” a social media effort that looked to identify the daily problems and complaints of its target young male consumer, and then offered ways to solve them.

“Given the success of the original Irritations Solutions campaign, it was time for the Edge brand’s irritation-solving skills to be put to use once more,” Jeffrey C. Wolf, senior brand manager for Edge Shave Gel, tells Marketing Daily. “But just repeating what worked last time wasn’t enough – the Internet has evolved since 2010, and what was novel and unique then is now commonplace.”

Conversation also moves much more quickly than it did three years ago, he says. “Conversations now trend and disappear within minutes, so the ability for brands to capitalize or participate in those conversations needs to be just as agile,” Wolf says. “[We] became an active participant in conversations in as little as an hour after they were identified by analysts.”

Using the latest social listening technology from Crimson Hexagon, the brand analyzed millions of tweets to identify trending sources of irritation, and offer solutions to those specific irritations. (In one case, for example, after millions of men took to Twitter to comment on Miley Cyrus’ MTV VMA performance, the brand encouraged them to tweet at them for the opportunity to win a DVR, and the ability to fast-forward through similar irritations in the future.)

In all, the brand says it solved more than 550 irritations expressed via Twitter and Instagram and doled out more than $25,000 in prizes. (Other unique prizes included a gas mask for an office worker complaining about smelly leftovers and a pallet of ramen noodles to a college student complaining about having to leave his dorm for late-night snacks.)

“The campaign as a whole moved at an incredibly agile pace and prizing was no exception,” Wolf says. “Edge community managers would often huddle together throughout the day to brainstorm humorous prizes that could be rewarded to irritated Twitter users.”

Offline, the brand hosted sampling and consumer events that tapped into the target’s passion points, such as offering free chicken wings at bars in New York City, Philadelphia, Boston and Chicago (as a response to the recent nationwide chicken wing shortage).

“Social media was integrated at every event, and we partnered with Twitter and the bars who hosted each event to amplify tweets with geo-targeted Twitter and Facebook ads, driving awareness and attendance,” Wolf says.