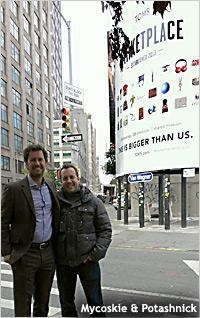 TOMS, the seven-year-old  shoe company and pioneer in the “buy one give one” commerce space launched its first paid media campaign today.  The campaign unveils its new TOMS Marketplace with the tagline, “This Is Bigger Than Us.”

The new marketplace initially includes 30 companies with a similar socially conscious business model to TOMS, which gives away a pair of shoes for every pair it sells.

WPP’s MediaCom, which TOMS hired earlier this year, orchestrated the media portion of the campaign, which is timed to the holiday shopping season and includes search engine marketing and optimization, paid social, online video, native ads, billboards in New York and  Los Angeles and video spots in New York City taxi cabs. Creative is handled in house at the client.

“It’s not really a brand campaign,” said Adam Potashnick, senior vice president and group account director at MediaCom. “The Marketplace is a totally different way to shop.”  The campaign is designed to create awareness of the Marketplace and to steer people there to buy products and gifts for the holidays, he said.

One the social efforts features the founders of the 30 initial Marketplace companies on Instagram sharing their stories. Online videos feature some of the founders of those companies talking about their work. One video delves into how the purchase of products promotes a cause such as a backpack funding a scholarship or a wooden toy supporting reforestation.

To date the company’s awareness efforts have been driven in large part by earned media. And that will still be a key driver going forward. Company founder Blake Mycoskie has been on the media circuit this week, including appearances on Good Morning America, CNN, Bloomberg among other outlets to talk about the new Marketplace.

“Everything we do from an advertising and marketing standpoint is about inspiring and not just selling,” said Mycoskie, who took on the chief marketing officer function a few months back after returning to the company after a year-long sabbatical.  Doing both, he said, is critical to building a company for the long term.

While the company’s core consumer in the past has skewed younger and more female, TOMS has recently added more products for men.  But the target consumer is less about age and more about attitude, says Mycoskie. “Every demographic has a sub-segment of consumers who care about giving and want to make purchases that count” for something beyond just their personal consumption, he said.

The in-house creative team came up with the “This Is Bigger Than Us” tagline for the marketplace. “That really sums it up,” Mycoskie said. “It’s a movement.”