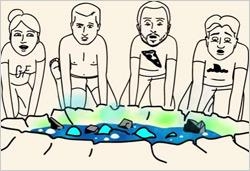 Bushmills Irish Whiskey has a hit on its hands with a new video featuring actor Aaron Paul, known to millions of fanatic "Breaking Bad" fans for his role as Jesse Pinkman.

Paul signed with Bushmills in August to be the latest star in the brand's ongoing "Since Way Back" series.

The series, launched in 2009, celebrates moments among friends that have inspired great stories. Previous videos have featured members of the bands Chromeo and Bon Iver, among others.

In the latest video presented by Bushmills Irish Honey, dubbed "The Sting" (aka "Cooking Up Meteorites") Paul entertains his three closest buds with a four-minute narrative. The story: He and another friend supposedly spread meteorites and dry ice in the backyard in 2012 to prank the third friend -- only to draw coverage from credulous local news media convinced that there were real meteor strikes focused in Paul's yard.

The video begins with footage of Paul and crew sharing laughs and Bushmills around a table -- then, in a format departure for the series, segues into animation as Paul relates the yarn.

Paul told a shorter version of the tale on "Late Night with Conan O'Brien" back in June 2012.

The Bushmills video, which was created almost entirely in-house by Bushmills agency Cornerstone, has pulled nearly 165,000 views since it was posted on YouTube on Nov. 21.

On Bushmills USA's Twitter account, the prominently promoted meteorite video has drawn thumbs-ups from Fast Company and HuffPost TV, among others.

An earlier "Aaron Paul & Friends" video for the "Since Way Back" series has generated more than 250,000 views to date.