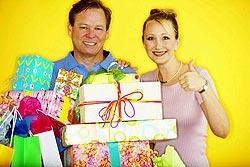 If holiday spend is soft this year, the government shutdown is partly to blame. Marketing research firm IBISWorld projects revenue will grow only 3.4% over 2012 totals, to a projected $68.9 billion. The firm suggests that the other reasons are slow growth in disposable incomes and sustained unemployment.

Broadly speaking, gifts are the big expense, generating 77.3% of total retail revenue the holiday season. The firm expects the category to grow 3.1% to $53.3 billion, though fewer people will benefit. Consumers are going to be purchasing presents for a smaller circle of friends and family, the firm predicts. But that lucky circle will also get higher-value gifts like electronics and jewelry.

Electronics, driven by releases of new games and gadgets, will see 6.6% growth. Sales of jewelry will increase by 7% from last year.

The firm says sales of cosmetics and personal-care items will grow only 0.2% over 2012, while purchases of clothing will decline 0.5%.

The nesting instinct, with people spending time with a closer circle of friends and loved ones, is also driving food and alcohol sales numbers this year. The research firm says the categories will beat total revenue this year, with a 4.8% lift from last year to $6.3 billion.

"Many consumers are opting for gatherings with close family and friends, particularly over food and drinks, instead of exchanging gifts with an extensive network," says the company in a report. About 111.7 million U.S. households will celebrate the holiday season this December, spending 3.9% more on average for a celebratory dinner than they did in 2012, the company predicts.

By contrast, decorations are likely to be left in the snow this season. IBISWorld predicts the segment will underperform the average holiday spend, growing only 2.9% from 2012 to less than $6.0 billion. "Tight budgets and weak economic confidence are encouraging consumers to reuse decorations from previous years or make some themselves instead of buying new decorations," notes the report.