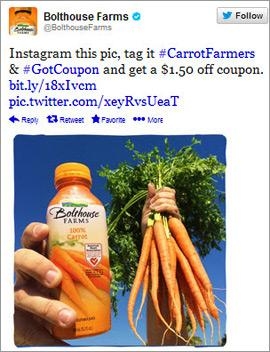 Bolthouse Farms may be nearly a century old, but it's using a decidedly innovative approach as part of its recently launched first major consumer campaign, focused on its juices.

The natural food and beverages maker is beta-testing a new social engagement tool, called Brand Recognition, to verify consumer Instagram posts of branded Bolthouse images and designated hashtags and then immediately reward the consumer with simple access to a coupon.

To participate, consumers upload an image of any Bolthouse Farms product, ad, Web visual, logo, etc. on their public Instagram accounts, along with the hashtags #carrotfarmers and #gotcoupon.

Once the program verifies that an image is a legit Bolthouse brand visual, the Instagrammer is automatically sent a link to be used to download a $1.50 coupon (the link can be copied into a browser or sent to an email account), bypassing the need for QR codes or third-party apps. (A link that enables the recipient to download and if desired print out a coupon is necessary because most grocery retailers can't yet redeem coupons directly off mobile devices.)

The tool was developed by Santa Monica, Calif.-based ad agency Tiny Rebellion, with digital technology agency Wildlife and RevTrax, a multichannel platform that serves and tracks in-store redemptions of digital coupons and other promotions .

Bolthouse had already identified Instagram as a major opportunity: Over the past two years, brand fans had uploaded more than 16,000 Bolthouse images to their Instagram accounts with the hashtag #bolthousefarms without paid media or other prompting from the brand, reports the company's director of brand engagement, Pamela Naumes.

The new tool's capabilities provided a cost-effective way to use Instagram to achieve national reach to drive trial, as well as brand awareness, without asking Bolthouse's on-the-go, social media-oriented target audience (ages 18 to 54, but averaging roughly around 30) to deviate from their existing social behaviors.

These consumers highly value convenience and a "seamless brand experience," says Naumes. They want relevant coupons, but on their own terms — so a new approach that makes accessing coupons through their mobile devices or laptops easy was critical.

The innovation seems to be paying off. This component of Bolthouse's campaign, launched in late October, is generating enough Instagram-uploaded images bearing the two campaign-specific hashtags that, if the current momentum continues, they will exceed those two years' worth of 16,000 organically-generated images with the #bolthousefarms hashtag within three to four months, reports Naumes.

Further, she says, more than 60% of those uploading images are printing out the coupon — more than any other channel (including paid advertising and search) in which Bolthouse is promoting coupons.

Tiny Rebellion CEO/partner Lucas Donat adds that the image uploads had generated more than 400,000 earned impressions as of early December.

He also points out that the Instagram initiative is enabling Bolthouse to drive interaction not only among its digital channels, but between its digital and traditional media – including the billboards that are the other major component of the brand's current campaign (since Instagrammers can upload images of the billboards, or any other Bolthouse-branded image).

Naumes reports that heavy out-of-home/billboard buys are being used to build brand awareness and drive home Bolthouse's "farm fresh" credentials (the fact that Bolthouse owns the farms that produce its juices) in three markets identified as being prime for yielding the greatest impact: Chicago, Miami and San Francisco.

She also says that Bolthouse is already planning not only to continue using the recognition program on Instagram, but to pump up its impact by employing outreach to social influencers and paid buys/posts on Facebook and other platforms.

Innovation with a Mission

Bolthouse Farms — led since 2008 by president/CEO Jeff Dunn, who previously served as EVP at Coca-Cola Company and president of Coca-Cola North America, among his other CPG credentials —  believes that innovation in marketing, as well as farming and product development, is critical to connecting people with fresh food.

For instance, three years ago, Bolthouse made waves by spearheading an alliance with other carrot farmers to implement an "Eat 'Em like Junk Food" campaign (from CP+B/Crispin Porter + Bogusky) that positioned baby carrots as a fun, delicious snack — eschewing a predictable emphasis on health benefits.

But much as Campbell is leveraging Bolthouse as a platform synergistic with its existing healthy beverages and snack brands, as well as investing to help grow the Bolthouse brands, Bolthouse continues for the most part to operate as an independent business.

That reflects Campbell's faith in Bolthouse's direction under Dunn, and its belief that it can benefit from learning about the fresh foods and beverages business from Bolthouse and other companies in that general sector that it has recently acquired.

Bolthouse has leading U.S. market positions in fresh carrots and super-premium beverages (which include smoothies, cafe and protein drinks, as well as juices) and a growing presence in refrigerated salad dressings. It markets its beverages and dressings under the Bolthouse Farms brand, and its carrots under that brand and the Earthbound Farms and Green Giant brands. It also makes private-label products.

With Campbell behind it, Bolthouse is revving up its ambitious brand mission: To lead a "revolution" in the way that people think about fresh foods by "making the healthy choice the easy choice."

Bolthouse contributed more than $750 million in sales during Campbell's fiscal 2013.

During its own fiscal 2012, prior to its acquisition by Campbell, Bolthouse's sales were $689 million, with adjusted EBIT of $92 million. Between 2010 and 2012, it boasted compound annual net sales growth of 7%.