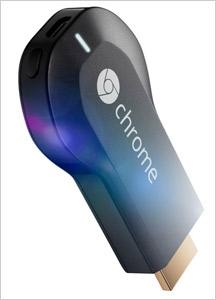 You have to give Google credit where it is due. After the debacle that was Google TV, the company bounced back with a novel and very effective wedge into the TV ecosystem with its Chromecast device earlier this year. The ease with which a user can throw content to the TV screen from Android and iOS apps (even the PC's Chrome browser) was an elegant solution that put interface and horsepower on devices rather than the TV attachment. Problem was, Google launched the platform with far too few compatible apps (YouTube, Netflix, Google Play) and was keeping a tight rein on adding new ones.

Until now. In just the last weeks Chromecast has added HBO Go, Hulu, Pandora, Vevo, Revision 3, photos via Plex, RealPlayer, and more. But even more to the point, Google's larger plan is starting to become clearer. In an article at GigaOm, Google VP of Product Management Mario Queiroz explains that Chromecast will be launching internationally soon. In addition, an open SDK is already being shown to more than 20 developers in preparation to its going live to all developers in 2014. Even before then, he promises another wave of compatible apps coming soon.

But the larger goal is to create a video-sharing and management platform that reaches across more than just iOS/Android/Chromecast devices. Google is hoping to get the Chromecast content-throwing protocols embedded in a range of other devices. We presume this means integrating it into TV sets, home theater amps and perhaps other set-top boxes and disc players. Google/YouTube and Netflix had already been working on an underlying DIAL protocol that would allow developers to access TV sets more easily even before Chromecast launched, and the dongle uses some of that platform to do its magic. The DIAL approach already has the support of major entities like Samsung, Hulu, Sony and the BBC. Apparently, everyone is looking for a good answer to Apple's AirPlay. And if these guys actually get their act together, they could create an effective and easy way to get Web content onto a TV that counters Apple.

It also promises to give the consumer the ability to throw video easily to one another and to any available screen in their house. With devices as the hub, people can take their how-to cooking or hobby videos with them to toss onto the most appropriate screen in kitchen or garage. And the “look at this” reflex for sharing discovered video gems becomes all the more flexible when you can aim your phone at the nearest bigger screen to share it there.

There is a real genius to the idea of moving Web TV discovery, interface and control to a smartphone or tablet. It is the set-top interface and old fashioned remote that add the real choke point in managing digital content on TVs. Putting the bridge technology on a plug-in dongle is an effective starter version of the technology. But it is this very simplicity that makes the technology so much easier to integrate into other devices. Likewise, it pushes huge amounts of diverse content through a platform that is delivering invaluable usage data to Google and ripe territory for YouTube.

This will be an interesting story to watch unfold in 2014… on multiple screens.