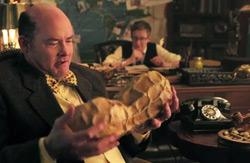 The series is designed to set the stage for a year-long integrated marketing campaign for M&M's Peanut. The campaign will kick off on New Year’s Eve at Atlanta's "Peach Drop." Beyond that, M&M's is saying only that the 2014 activities will involve "premiere destinations in sports and entertainment."

In the video series, "Search for the One," Koechner plays "Peanutty Professor," an eccentric explorer who has spent his life looking for the perfect peanut. Purpose: To convey, in an entertaining way, M&M's' message that "only 1 in 100 peanuts is lucky enough to become an M&M's Peanut."

Koechner’s improvisational humor is spotlighted in more than a dozen long- and short-form video segments and photos following the professor's adventures.

Each piece of creative was customized for a variety of social platforms, including the M&M’s Facebook, YouTube and Instagram channels -- and all have been posted simultaneously, rather than released piecemeal over time.