Click-through rates on ads for retail brands are far and away the highest among all verticals advertising on devices. Ad delivery platform DG MediaMind has drilled into data from more than a thousand mobile ad campaigns in 2013 and two billion ad impressions. Measured purely on the crude CTR basis, retails ads got on average .52% click-throughs, compared to .41% for electronics and .40% for entertainment. Take note that these metrics are unfortunately combining smartphone and tablet ad performance.

In a report based on the research, DG MediaMind says that both retail and electronics verticals benefit from more mature messaging and experiences. The calls to action are clearer and more compelling than in many other categories. And the landing pages tend to be more consistently mobile-optimized for a better follow-through encounter with the brand. The overall average for mobile ads is .38%.

On the other hand, telecom advertising on mobile devices, among the heaviest presences, gets a nigh-invisible .06% CTR. Faring only slightly better is travel, which gets .13% CTRs. Well, to be fair, decisions for both telecom and travel have much longer and involved cycles than general retail and even electronics. Overall branding, presence and share of voice on mobile platforms is a more likely goal for these segments.

The survey did find that richer media performs considerably better on smaller screens. Expandable banners, for instance, had an average CTR of 63% that ranged as high as 9.0% for entertainment ads and 8.9% for electronics and 5.5% for autos. Even the usually richer but “polite” banners that load progressively on a mobile page performed at .28% CTRs and well above the .09% for standard banners.

When it came to interaction rates with richer units, however, the auto industry campaigns left all others in the dust. On HTML5 expandable banners, auto ads saw 27.7% interactions, compared to 1.3% with polite banners in HTML5. Their campaigns tended to use a combination of assets to maintain user interest at various points in their purchase journey. Top-of-funnel consideration was fueled by images and galleries and midpoint consumers by model details and promotions, while click to call and dealer mapping were often driving bottom-funnel users.

Auto enjoys substantially higher rates than the 17.9% ITRs on expandable banners seen among CPG ads, although their interaction rates on polite banners were higher (3.06%). Combining expandable and polite banners with interaction opportunities, average ITRs for auto campaigns were 20.7%, for CPGs 11.7%), for electronics 7.9%, and 5.0% for entertainment.

Not surprisingly, campaign assets and goals varied by category. Auto, CPG and electronics made heavy use of image galleries, while electronics, entertainment and retail had location-related features that were often prominent. Entertainment, financial, retail and travel tend to drive ad viewers to download an app. CPG and entertainment tend to incorporate social sharing.

Among those video-enabled ads that started from expandable or polite banners, the auto segment had the highest average start rate of 9.16%, compared to 5.43% for CPG and 3.29% for telecom. There is also a tremendous range in completion rates as well. Again, auto leads considerably. Its videos initiated from banners were finished 79.8% of the time, compared to 65.7% for CPGs, 54.4% for telecom, and 43.7% for financial. 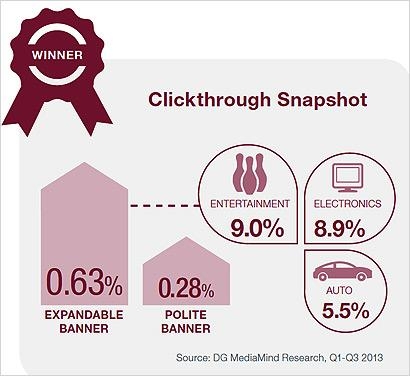