Are you ready for some fractions?

But this is where stats can be misleading. Auction volume in the U.S. actually grew 6% last quarter compared to the previous quarter.

An educated guesser would likely say that the UK is leading the pack of international markets in the RTB space. But for the first time, they’d be wrong.

The UK had been the second-leading country in terms of RTB market share, but it was overtaken by both Japan and Brazil in the fourth quarter. However, still no country outside of the U.S. can lay claim to more than 5% of the market share.

The data comes from Accordant Media’s Q4 2013 RTB Market Pulse report. The company’s co-founder and CEO, Art Muldoon, believes Japan and Brazil now own a larger share of the market than the UK because neither country is in the fragmented mess that is Europe. 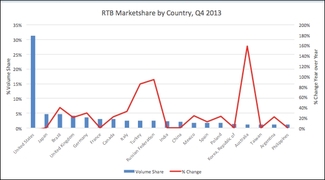 “The European markets are really 25-plus fragmented markets with their own rules and regulations,” Muldoon said.

Muldoon also highlighted Turkey and Russia as countries to watch in the space. Turkey is ninth in market share and Russia is 10th. In addition, both countries have high year-over-year growth in terms of market share, outdone only by Australia.

Muldoon said that each quarter, Turkey and Russia have climbed further up the market-share chain. If their growth rate continues, they could soon overtake more talked-about countries, such France and Germany.

How about the breakdown here in the U.S.? There aren't many surprises, as the impression share by state is closely aligned with population. California is home to 14% of all RTB impressions, while Texas sees 7.5% and New York sees just under 7%. Florida (6%) and Pennsylvania (4%) round out the top five.

The fact that the U.S. share of the global RTB market declined 34% year-over-year while actually growing itself speaks volumes about the growth overseas.