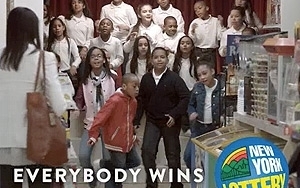 In a bid to bring some cause-related magic to lottery lovers, the New York Lottery is introducing a new ad campaign that plays up the game’s contribution to local schools.

Themed “Everybody Wins,” the new effort, from DDB New York, focuses on what funds generated by lottery tickets do for schools. The TV spot stars the Gibson Group of Haven Academy from the South Bronx, and the grade schoolers break into an impromptu version of “Thank you for being a friend” in a convenience store when someone buys a ticket.

In addition to the TV, radio and print ads, it encourages schools to film and upload their own versions of the song. Five finalists will make it to the brand’s Facebook page, for a shot at a $10,000 prize.

The point of the effort is that 68% of those between 18 and 24 years of age, and 51% of  those between 25 and 34 are unaware that New York Lottery revenues are used for schools, and this Gen Y audience is the most likely to buy cause-related products.

“While the New York Lottery continues to be North America’s largest and most profitable lottery, some New Yorkers may not be aware that lottery’s sole purpose is to provide aid to public schools in the state,” Gardner Gurney, acting director of the New York Division of the Lottery, tells Marketing Daily via email. “This is a constitutionally mandated mission, and we want to make sure that players understand that discretionary dollars spent on the lottery go to a worthy cause.”

The new ads, he says, reflect “a demographic of younger adults that makes discretionary purchase decisions based on the good-cause-purpose of an entity. The goal of the campaign is to increase awareness of the mission, which will hopefully translate into more people playing the lottery.”

Gardner says the lottery is on track to provide $3.1 billion in aid to education during this fiscal year, compared with $3 billion last year.

Consumer advocates have long criticized lotteries for leading consumers to believe they contribute additional funding for education, rather than act as part of the state’s funding formula.

“Lottery earnings are an integral part of the state's entire aid package to local education,” he says, “representing 15% of total state educational spending.”