Yes, One Ride, Two Cheerleaders And A Marching Band Please 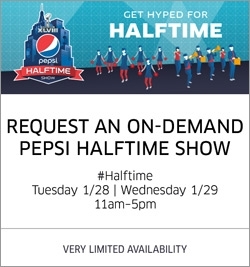 With the help of OMD Ignition Factory, the company is deploying teams of cheerleader squads and marching bands to Uber users who request a “Pepsi Halftime Experience” via the Uber app Tuesday and Wednesday of this week.

According to the agency, Pepsi is the first brand to use Uber in this way – focusing on the company’s “ability to deliver unique experiences rather than simply transporting customers.”

Pepsi is the official Super Bowl Halftime sponsor in this year’s game, which is being played at MetLife Stadium just outside of New York City this coming Sunday (Feb. 2) and televised on Fox.

Like many Super Bowl advertisers, Pepsi is trying to extend the reach and impact of its halftime sponsorship with a little pre-game hoopla. Hence, the tie-in with Uber over the next two days.

For lucky Uber app users who click the app’s Pepsi Halftime button while ordering their ride, Uber will send the Pepsi Halftime Experience Bus, carrying cheerleaders and a marching band.

During each “experience,” the bands and cheerleaders will perform a customized cheer using the user’s name and location. Pepsi beverages, as well as branded Halftime tee shirts, foam fingers, and foam footballs will also be distributed.

Pepsi is deploying multiple band/cheerleader teams to fulfill the experiences throughout the two days. And it’s all being video recorded so for those that can’t or don’t want the in-person experience, online viewing of it will be an option.