Super Bowl First For Audi A3 This Year 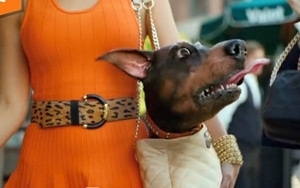 Audi likes to leap from behind a curtain with its Super Bowl ads. They start with a statement on culture, and reveal a product that also benefits from the statement.

Remember the Green Police spot in Super Bowl XXLIV (2011) that flipped the Cheap Trick hit to tout the A6 TDI diesel? Or the one with the Godfather theme, where the guy wakes up to find the grill from his staid luxury car (instead of a horse's head) in his bed, with the then-new R8 supercar screeching away as the super says, "Old luxury just got put on notice"? Or last year’s zombie-themed ad, where the headlights of an A4 accidentally illuminate, and thereby eliminate, the undead?

This year, the company used observations about the weird breeding habits of obsessed pet owners to make a point about its redesigned A3 car. In this case, the cross is between a doberman and a chihuahua. Result: an unfortunate mashup called a doberhuahua. The message: the Audi A3 might be smaller, but it is not a victim of compromise.

"Each year we look at how to connect with America through one of many trend lines," says Loren Angelo, Audi of America’s director of marketing. "There was the vampire trend, the environmental story ... we look at what's happening in popular culture and make a powerful statement that plays off of it in a funny way, and pair it with a smart message. We think that's what sets us apart."

Angelo tells Marketing Daily that the brand likes to draw viewers into the story line and the pull the rug out: the focus may be the A3, but the larger point is that there are no compromises in any of Audi's cars. The Super Bowl, he says, "provides us with a huge platform to build awareness and aspiration for the brand among consumers of all ages, whether 'tweens or boomers. We have seen the benefits: awareness, consideration and opinion have gained each year and that translates to demand at dealerships."

He says Audi has a strong social program installed both on Twitter — #stayuncompromised — and Snapchat this year. The latter is a funnel for consumer content based on social media queries about how they have managed to "uncompromise" their own lives to see the game. Angelo says Audi will also have two "command centers" -- one each in New York and San Francisco -- to manage social conversation in real-time.

The A3 campaign proper, starting this spring, will surely focus on the fact that the A3 is the first car in the lineup to benefit from Audi's new partnership with ATT toward delivery of 4G LTE in-car WiFi, a program announced at this year's CES in Vegas. "When you look at the car [priced at around $29,900] there's no compromise. It comes standard with 4G LTE, leather, LED daytime running lights, handwriting-recognition touch console. These are features that are available on our [flagship] A8."

The automaker is also leaning on its Hollywood connections to move the cache needle. The automaker had the R8 in "Iron Man" and has had a futurist interpretation of the lineup in the recent "Ender's Game" film, plus placement on TV shows like "Modern Family," for the A8, and with awards shows like the Emmy's, of which it is official auto partner. Angelo says A3 is in the green room for another big TV integration. Stay tuned, as they say.