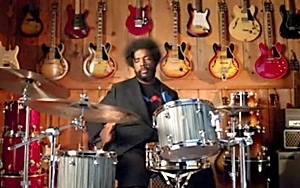 Musical instrument retailer Guitar Center faces incredibly stiff competition. It's possible, in fact, that the competitive landscape for musical instruments is tougher than for any other category of business. It’s not really about winning consumers from Sam Ash, or Musicians Friend, or Amazon, or eBay, or any other seller, for that matter. If only.

The real competition is the same one faced by books, knitting, talking, playing chess and being, like, an unwired human being: the virtual, you-can-have-it-now world of instant digital entertainment. Learning to play an instrument takes time.

Frank Hamlin, EVP of marketing at the Westlake Village, Calif.-based retailer, points out that while probably 20% of Americans have some kind of musical instrument in their house, only about 6% are actively participating in the realm, and those numbers aren't growing. "It's so incredibly easy to consume music now, so what we are trying to do is draw an emotional line in the sand: making music is the ultimate form of expression. For us to grow, part of the opportunity is to get more than six out of a hundred people to become interested in playing."

Thus, the company is launching its first-ever tier-one brand campaign aimed directly at selling instruments by selling the experience: the tag is "All we sell is the Greatest Feeling on Earth." The broadcast, print and online push, via Pereira & O’Dell, launched with a TV spot featuring musician Questlove as the campaign's first ambassador. Hamlin says there will be others as the campaign evolves.

Questlove, who is the band leader for Jimmy Fallon, and Time's "Coolest Person of 2013," has an appeal that crosses generations. And, says Hamlin, he is about music -- not a particular instrument. "He’s a drummer, so it gives the message that we sell anything to make music."

The campaign addresses the top tier of a three-tiered marketing strategy that Hamlin says can be articulated thus: Why play? Why Guitar Center? And why Guitar Center today? On Black Friday, the company launched a fictive spokesperson, "Steve," who is being used now to promote a President's Day retail event, addressing, obviously, the third question.

Hamlin says strategy for the category used to be all about the "buy now" deal push. "It used to be tractor-pulling sale advertising and that worked in the day, but today that's table stakes." Another opportunity, he says, is getting more women to come to the stores, as the traditional retail footprint visitor traffic is 15% female, while Web business is 35% female. He says 85% of Guitar Center overall sales is at retail.

The Guitar Center's demographic tends to be 30-something and older, so the ambition is also to reach younger people and so-called "screenagers" who are glued to computers, consoles and mobile devices for entertainment. "We have to create the desire to stick with something until you reach a level of proficiency. You need to get people over the hump that it's a journey. So share of wallet is less my concern than share of clock."