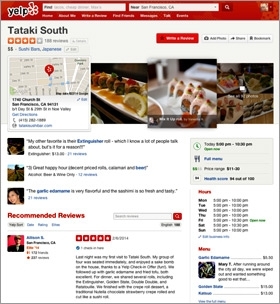 Yelp on Tuesday announced the rollout of an updated Web site including redesigned business pages that feature larger photos and highlight user reviews more prominently. On the desktop, Yelp.com now more closely resembles the more streamlined version of the ratings and review site on the mobile Web.

“You’ll notice our new design emphasizes the unique local content our community has contributed and makes finding key business information even easier for consumers,” stated a Yelp blog post today about the site refresh. High-quality photos are now front and center on listings pages instead of thumbnail images tucked in the corner.

Up to six photos are featured on a page, but three appears to be more typical. As before, users can click through to see more images for a venue uploaded by users. For restaurants in particular, which dominate Yelp listings, larger images of popular dishes have the potential to lure new customers.

The revamped Yelp.com also features highlights of reviews for a particular restaurant or business above the fold, just below the contact information and photos. “Because review highlights are so useful, we’ve given them a huge upgrade, mining our review data to call out the best menu items, prices and important information like whether a bar is beer and wine only,” stated the Yelp blog post.

With 53 million reviews posted to date, the depth of user-generated content on Yelp has long been viewed as a key advantage for the site in the local search space. With that in mind, the company also narrowed the column width and enlarged the font size for “optimal reading.” Photos have also been added in-line to reviews to provide more context.

Yelp wants to provide a more consistent user experience across the desktop and mobile. In reporting fourth-quarter earnings last week, the company said a majority of searches now take place on mobile and 47% of ad impressions. Nearly a third (30%) of the 1.1 million reviews posted in the quarter also came from devices.

The Web redesign also comes on the heels of Yelp’s deal with Yahoo to integrate its listings and online reviews into the Web giant’s primary search results. When people click through from a Yahoo search, Yelp may also want to make sure they go to a page that  is more consistent with Yahoo’s own image-centric redesign over the last year or so.

As of the fourth quarter of 2013, Yelp said it had 120 million unique monthly visitors globally, up 39% from a year earlier. In the U.S., the site drew 35 million visitors in December, according to comScore.