Symantec Has Solutions For #SochiProblems 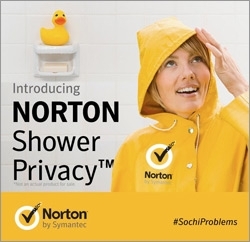 With reports of toxic water, inoperable bathroom doors and possible surveillance in the shower, issues with the winter games in Sochi have become their own story from the Olympics. Under the guise of protecting consumers when they’re vulnerable, Symantec has taken to using the theme to promote its Norton Mobile Security computer program.

The strategy, which has been using the trending popular hashtag #SochiProblems, is part of an overall company initiative to insert itself into the ongoing popular topics of the day, says Charlie Treadwell, director, social marketing, brand, digital and advertising at Symantec.

“On social media, the stories that are engaging our followers the most are when we play with the trending news stories and memes,” Treadwell tells Marketing Daily. “I have content strategists that every day are looking for trending stories.”

Although the company had been watching trending news stories in the past (including chiming in when Justin Bieber was arrested in Florida recently), the Sochi games have been a continual source of subjects to help the brand insert itself into the trending conversations. When the notion that Russian security teams had surveillance of people in their bathrooms surfaced, Norton sent out a picture on Twitter of a woman taking a shower in a raincoat (in Norton’s trademark yellow), with the headline, “Introducing Norton Shower Privacy edition.” When NBC anchor Bob Costas’ conjunctivitis became a news item itself, the brand suggested it had a “Pink Eye Protection” spray.

“We’re trying to play with these things with the theme of ‘We’re protecting people in ways they hadn’t been expecting,’” Treadwell says.

The effort, which requires people to be on call and brainstorming at all hours, is not simple, Treadwell says. To ensure the brand stays relevant with the conversation, Symantec has leveled out approval layers so an idea can come in and go out quickly. The company has also created a chart of “concentric circles” to show which topics (politics, religion, etc.) are untouchable.

“If someone has an idea, they can text me at any time, and I can turn it over to my team,” Treadwell says, noting that he has his legal and marketing teams (including those at his agency Grey in San Francisco) on speed-dial.

The effort is a way for Symantec and Norton to build a bigger bond with its current and potential consumers through a mix of fun personality and overt sales, Treadwell says. “We really want this idea of helping people to bond [consumers] with the brand,” he says. “Social is a place you can do that where you can’t anywhere else.”