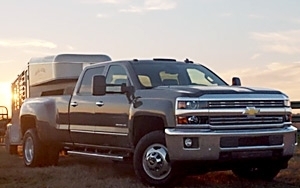 “Results may vary” when it comes to Super Bowl advertising, and not just on the subjective like/dislike scale. Automakers' advertising before, during and after the Super Bowl on Feb. 2 garnered an array of digital reach numbers, according to Millward Brown Digital's (MBD) Digital Impact Analysis, which ranks brands based on online daily reach.

Some, like Hyundai, had huge spikes on two occasions with their lead-up efforts. Only one, Chevrolet -- which used the game to talk about its pickup trucks -- saw its lead-up efforts build Web traffic through game day and then spike, Everest-like, through Feb. 4, leaving others far below, at least for a day or two.

Based on a two million-strong online panel of U.S. consumers, representative of U.S. browsing population, the study finds that although most automakers did pre-release campaigns, not all were successful. And only Chevrolet was able to keep its site visitation elevated post-Super Bowl.

Hyundai's double spike in daily reach the week before the game was driven by pre-release of both its Super Bowl ads for its Elantra and Genesis Coupe, respectively. Its reach constituted 0.15% of total Internet traffic for Jan. 31, superseding the automaker's 2012 performance when it had five ads in the game. Maserati and Jaguar got the two greatest daily reach spikes on Super Bowl Sunday.

Chevrolet's reach hit 0.2% on Feb. 4 before plummeting. Honda saw a slight increase through game day, and then a spike on Feb. 6 -- a day on which Toyota also enjoyed the second of two spikes in daily reach, the other on Feb. 4. After its biggest spike on the 31st, Hyundai's reach fell steeply through game day and beyond.

Tom Lucido, MBD client services manager and author of the study, tells Marketing Daily that these spikes don't correlate to sales -- just interest and awareness building. "Nobody buys a car during the Super Bowl," he says. "You have to identify consumers that never shop for Chevrolet, and study whether [the Super Bowl advertising] motivated the process."

Lincoln Merrihew, managing director of transportation at MBD, concedes that achieving this -- and in general, measuring effectiveness of the advertising as a sales driver -- isn't so easy. "These results may not show up for three months. Chevrolet would hope people remember who are in market for a pickup. But a big spike in reach doesn't necessarily lead to sales right away. It's about the longer-term impact."