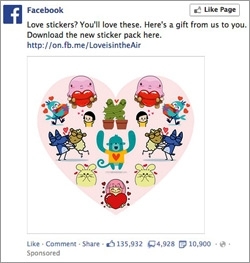 In the week leading up to this year’s love day, online shoppers referred from Pinterest averaged $147.74 per order, overshadowing Facebook referrals, which drove $125.24 per order.

However, Facebook referrals converted sales at 3.5 times the rate of Pinterest referrals -- which, according to the latest IBM Digital Analytics Benchmark data, suggests stronger consumer confidence in network recommendations.

“You trust your friends to share recommendations based on their personal experience and what they believe you would think about the product -- because they know you,” Wong added. “Pinterest offers similar engagement, but a mix of strangers and a smaller user base -- which doesn't include all of your friends -- seems to make all the difference.”

Year-over-year, online shopping rose 8% between February 7 and February 13, according to IBM's study.

Growth was particularly strong in the gifts sector, which rose 20%, along with apparel (up 17%) and health and beauty (up 15%). Department stores also did especially well, as online purchases were up 34% year-over-year.

Smartphones drove 23.3% of all online traffic compared to tablets at 13.3%, making it the browsing device of choice.

When it comes to making the sale, tablets drove 11.4% of all online sales, twice that of smartphones, which accounted for 5.6%. Tablet users also averaged $135.26 per order, versus smartphone users, who averaged $114.00 per order.